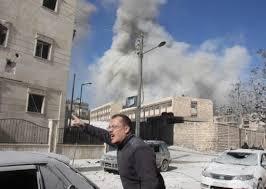 The Syrian army on Thursday recaptured the strategic central town of Morek, nine months after it was seized by rebels and their Al-Qaida allies, a monitoring group said.

The army was backed by militias loyal to President Bashar al-Assad in the battle for the town in Hama province, the latest in a string of victories they have scored against rebels seeking his ouster.

"Regime troops and their militia allies took back total control of Morek in the north of Hama countryside, after fierce battles that have raged" since Wednesday night, said the Syrian Observatory for Human Rights.

The regime forces were aided in the battle by heavy air raids targeting the rebels and fighters from the Al-Qaida-affiliated Al-Nusra Front. The death toll was not known.

The report came after state television announced the army had taken back "the majority" of Morek from rebel hands.

Morek is important because it is on the main road linking Damascus to Aleppo in the north, large swathes of which of have been out of army control since a major rebel offensive in July 2012.

The town is located near the countryside of the northwestern province of Idlib, much of which is held by moderate rebels who drove out the jihadist Islamic State group (IS) earlier this year.

Syria's multi-front war broke out as a peaceful movement demanding Assad's ouster but has since spiralled into a savage conflict that has killed more than 180,000 people and forced nearly half the population to flee their homes.

This is the key sentence 'The town is located near the countryside of the northwestern province of Idlib, much of which is held by moderate rebels who drove out the jihadist Islamic State group (IS) earlier this year.' Where did the Assad regime drive IS from?