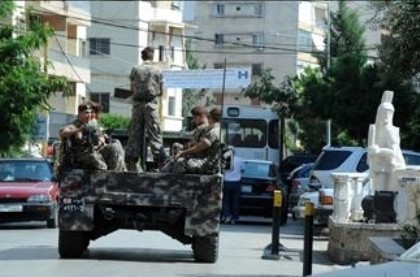 The Army Command will recruit around 1,000 soldiers starting next week as the military is battling Islamist militants, who are entrenched on the outskirts of the northeastern border town of Arsal on the porous Syrian-Lebanese border.

An Nahar newspaper reported on Friday that another 1,000 soldiers will be recruited in January 2015.

The report comes amid the increasing defection of troops from the Lebanese army with rising fears that the institution is being targeted with a campaign to create chaos within its ranks.

The first time a Lebanese soldier defected to the Nusra Front in neighboring Syria was in July. The number has reached 5 so far.

Earlier that month, the extremists crossed into Arsal from Syria, capturing soldiers and policemen. Two of the soldiers have since been beheaded and one has been killed in captivity.

The attacks against the military rose after the Arsal gunbattles.

Unfortunately these recruits end up serving as mref2in (guards) to politicians and officers, and work for 18 years then cash a hefty retirement bonus, and continue getting salary untiil the end of their life and the end of the life of their unmarried daughter.

We have 40000 in the army. I say train those in non combat positions instead of increasing the financial burden on the state.

don't forget the mref2in (guards) lal sitt also because she also needs guards to take her to the supermarket.

those blanket statements are flase and slanderous against the army.

the LAF is doing a great job, and as a matter of fact bodyguards for politicians come from another security corps.

Loyalty to the LAF and ISF ONLY, it bothers me when you see HA goons saying they support the Army, yet devote to a foreign militia, shame.

If their head lies on TV and they burn Beirut after his speech what do you expect from his blind followers? They claimed they will lift their arms only only against Israel to defend lebanon, only group that benefits from political assisinations yet they blame Isreal, they fight foreign battles and execute car bombs at foreign countries under iran orders.

it would be an honor to join.
long live the lebanese army!

At least you will stop posting spam and do something productive

"kanaadian.shia (Guest)" you're the one posting spam and pointless sectarian incitement.

you guys are flattering me, at least 3 fake kanaandian mockery impostors!
long live lebanon, long live the lebanese army.
does that offend you pro baghdadis?

try to make your point without talking like an open sewer.

are you taking flamethrower's place and approach? I always thought you were the same user anyway.

who cares what you think?

"mowaten soori"? as if this was negative? any syrian citizen's flip flop would still be worth 10 times the filthy takfiri you are.

_mowaten_, you're the one posting spam and pointless sectarian incitement.

they didnt get much monney until now, and there is no point recruiting 10,000 troops if you can properly train, equip and support them. also, for each recruit you have to plan for decades of salary & expenses + retirement, you cant recruit and then dismiss a few years later because you're out of budget.

meant to say "if you *can't* properly train, equip and support them"

What defections? 5 idiots that have embarrassed their families? Instead of villagers arming themselves they should all join the LAF! God speed to our soldiers... Ya WATANI!

mowaten... conscription accounted for 20,000 soldiers. They have enough weopons and ability to train privates in the army. Instead of bringing back conscription the salaries should be increased. Pay the private soldiers double what they are getting now and see the line up at the recruitment centres. Instead of paying them peanuts and feeding them fasoulia, pay them a decent salary and give them free education at the universities like in Australia. They train them and educate them at the same time! The Government wastes so much money and borrows so much.... for what? What is needed is a strong, professional and confident armed forces.

couldnt agree more on the principle, but then we still need to find the financing for all that.
if only we could find the 11 billion $ "lost" by saniora's governemnt, or the tens of billions swallowed by hariri...

Mowy, let's not forget the ships from turkey..are they still coming?

they have been here for yeats chupachups, but you're too busy posting BS to notice.

I was thinking the same thing mowaten. We are so much alike in how we think. I just hope people don't think we are the same poster

speakfreely... The LAF has not received any money! All they have received is small arms and hell fire missiles from the USA. All the money that KSA has so famously donated to the LAF i.e. The $3 billion US, is nothing but an arabian desert mirage... bedouin lies. France has agreed to supply the weapons but are frustrated as to why KSA is holding back the money... It's because they don't intend to give anything. Without the heavy weapons, the LAF can only rely on a well trained "Special Forces" army that can fight without the heavy weapons they really need. The aussie ADF only have around 30,000 army soldiers but they are all trained so well, that even the standard soldier is at the special forces level compared to many other armies. This is something the LAF can do without relying on donated advanced weaponry that will never come.

God bless the Lebanese Army, the only protectors of our country.

Excellent news, this recruitment drive. Now here's a little piece of advice for those in charge of the army: Do please consider using some of those extra funds being donated to the army by foreign nations to raise the paid salaries of the soldiers at least to above whatever ISIL is paying them to defect, and not just to buy weapons. In some article recently I remember that ISIL was recruiting part of the 95% of Arsal that are unemployed with as little as a $500 monthly salary...