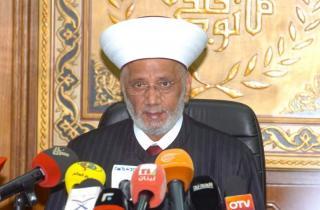 Grand Mufti Sheikh Abdul Latif Daryan on Friday called on the Lebanese to hold onto the state and its constitutional institutions and rejected the use of religion as a cover to gain power.

“Our project is the unified state and the single army and coexistence,” Daryan said in a statement on the occasion of the Islamic New Year.

He “urged the Legalese to hold onto their nation, state and constitutional institutions no matter how much efforts they exert.”

“Our religion today is in crisis because of divisions and the rise of extremism,” he said in his address to the Lebanese in general and the Muslims in particular.

“Muslims today are fighting and killing each other,” he lamented.

The bickering parties “are using religion as a cover in their greed” for power, Daryan added.

He said the 1989 Taef agreement ended the civil war and the Lebanese established the state again.

“But since 2005 we are seeing efforts to undermine the state, which has cost the Lebanese bloodshed,” Daryan said in his address.

He rejected the spread of chaos, asking “who is benefiting from the loss off Lebanon … and the emigration of the Lebanese?”

this is how a Muslim spiritual leader talks.
compare nasrallah to this dignitary and you have your result for a terrorist extremist Iranian traitor.

Does this official cite God as his authority for the Taef Accord's bestowing half the seats in Parliament on the Christian minority: is that peace founded on justice. I think this official shows what happens when the government pays the clergy. Not only does he offend against the people in general, but against his own constituency. How can any Muslim in Lebanon accept that set-aside of Parliamentary seats to the formerly even-more privileged minority which threatens civil war if this stupid "equality" is changed?