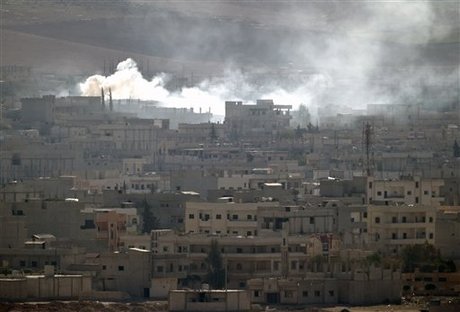 Syria's Kurds reacted coolly Friday to the prospect of hundreds of rebel fighters joining their defense of the border town of Kobane, suggesting they should focus on fighting jihadists elsewhere.

Turkey said on Friday that 1,300 Free Syrian Army (FSA) fighters -- who are battling to oust Syrian President Bashar al-Assad -- would travel to Kobane, located just across its border.

But two top Syrian Kurdish officials told AFP that it would be better if Syria's rebels opened fronts against the Islamic State (IS) jihadist group in other parts of the war-torn country.

"If they really want to fight Daesh, they can attack (the jihadists) from Azaz and Ifrin (in northern Syria) eastwards," said Bulat Jan, a spokesman for Syria's main Kurdish fighting force, the Kurdish Popular Defense Committees (YPG).

Daesh is a pejorative Arabic acronym for IS.

"Any force that enters our areas without our permission would be considered an enemy force," added Jan.

He stopped short of saying whether the Kurds would turn away rebel reinforcements.

The town of Kobane has become a crucial battleground in the fight against IS, which holds significant territory in Iraq and Syria.

On Thursday, veteran Syrian rebel commander Colonel Abdel Jabbar al-Okaidi said he would send fighters into Kobane across the Turkish border to support its Kurdish defenders.

Jan voiced suspicion about Okaidi's intentions saying the Kurds would not "allow him to play the role of a Trojan horse".

His remarks drew scorn from the PYD, which Erdogan a day earlier had branded a "terrorist organization".

"How can Turkey coordinate with a party that it has accused of terrorism?" said its spokesman in Europe, Nawaf Khalil.

Ankara views the PYD as the Syrian arm of the Kurdistan Workers' Party (PKK) whose three-decade armed campaign for self-rule in Turkey has left 40,000 people dead.

Iraqi Kurds have said they will send up to 200 fighters through Turkey to Kobane to fight IS.

There are an estimated 2,000 Kurdish fighters battling IS jihadists for control of Kobane.

"As you know, in our talks with (U.S. President Barack) Obama we had agreed that the FSA could be the first choice (for deployment in Kobane) and the second choice could be (Kurdish) peshmergas," Erdogan said Friday in Tallinn.

He has also raised the acute humanitarian crisis gripping Syria and the spillover of refugees into Turkey.

Turkey is separately hosting over 1.5 million Syrian refugees who fled the civil war between Syrian President Bashar Al-Assad and rebels seeking his ouster.

"Where was the world when 300,000 people have been killed in Syria thus far?" Erdogan said Thursday in Riga.

"Why are they so keen on Kobane, but not on the whole of Syria? That's a question to ask."

Erdogan was in EU member Estonia Friday, where he was expected to discuss Turkey's bid to join the 28-member bloc.

yeh that will be interesting to see if this doesn't result in kurdish FSA fighting in the near future. At the end of the day, only a political solution will end the syrian conflict and you cant deal politically with ISIS or al nusra. Only the kurds, FSA and syrian regime can end this.
Same goes with the idea that Assad's regime cannot be apart of a negotiated end. The majority of syrians are clearly on the Government side and any peace settlement will result in the turkish promoted FSA, SAA and Kurds ceasefire or alliance.

What the hell is Erdogan doing? Kobani is trying to fight the jihadist terrorists, not add more of them.

Legitimate if you're trying to establish a Salafist caliphate.

bro, I have to agree with you on this one bro.

what do you want them to shout:"Oh Jesus"?!

m8 are losing it. goes to show how morally bankrupt they are :)

"If they really want to fight Daesh, they can attack (the jihadists) from Azaz and Ifrin (in northern Syria) eastwards," said Bulat Jan. "Any force that enters our areas without our permission would be considered an enemy force," added Jan.

Shou, where are all the al Qaeda sympathizers now? I thought FSA-Al Qaeda was allying with the Kurds? It looks like the Kurds hate FSA-Al Qaeda just as much as Assad does, lol.

if i were a kurd, i wouldnt' feel comfortable about the friends of erdogan "joining" me in the battle against isis. after all, erdogan is the best friend of ISIS and the fsa are predominately moderate islamists, who are also known as pro al qaida members.