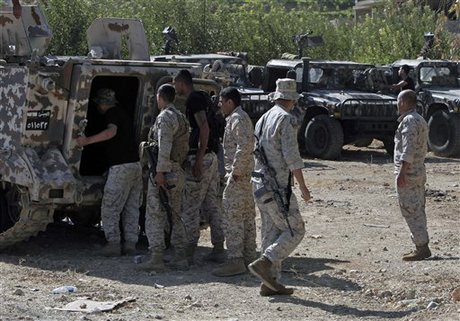 The Lebanese security forces are preparing for an assault against sleeper cells planted in delicate areas across the country amid reports saying that soldiers who recently defected from the army are still on Lebanese territories.

Security sources said in comments published in al-Joumhouria newspaper on Saturday that the army will raid several regions across Lebanon to destroy small groups planning to carry out delicate security acts in the capital Beirut, Beirut's Southern Suburbs and the Bekaa.

Security measures were boosted simultaneously in Dahiyeh and northern Bekaa.

Sources told As Safir newspaper that the army detained recently a number of “dangerous fugitives,” who confessed to plotting terrorist acts.

The sources also revealed that the army busted terrorist networks that are linked to the Islamic State of Iraq and the Levant (ISIL) and al-Nusra Front, which have taken Syrian encampments as their refuge.

Sources told As Safir newspaper that several soldiers who had announced their defection from the army and joining jihadists didn't leave the country.

According to the sources, the defected soldiers are taking cover in areas in northern Lebanon after they weren't able to move to the outskirts of towns bordering Syria due to strict measures taken by the army.

The report comes amid the increasing defection of troops from the Lebanese army with rising fears that the institution is being targeted with a campaign to create chaos within its ranks.

The first time a Lebanese soldier defected to the Nusra Front in neighboring Syria was in July. The number has reached 5 so far.

This armed group is Called Hizbollah!

Which the leaders allegiance is not with Lebanon but Tehran.