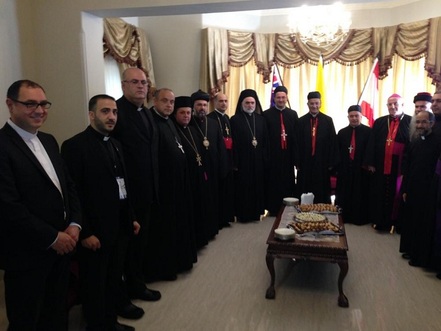 Maronite Patriarch Beshara al-RAhi renewed on Saturday his call for the election of a new head of state, rejecting to let the Lebanese get used to the vacuum at the Baabda Palace.

“There is no justification for not electing a new president,” al-Rahi said during a meeting at the Maronite Diocese of Saint Maron of Sydney in Australia.

The Patriarch headed to Sydney on Thursday on a two-week pastoral visit.

Al-Rahi pointed out that there's no state that accepts the vacuum that Lebanon is passing through.

He urged lawmakers to assume their responsibilities and elect a new president.

The country has been without a president since the term of Michel Suleiman ended in May as the rival parties have failed so far to agree on a compromise candidate, which is threatening to thwart the upcoming parliamentary elections.

“Christians should not fear because they are not minorities in (Lebanon) and the region,” al-Rahi said.

“Wars that fall in favor of narrow political and economy interests and encourage arms trade should end.”

Al-Rahi also called for the importance of eliminating all support to extremist and terrorist groups.

I wonder if the Batrak is also meeting with the_roar and flamethrower in Australia too.

Not only can the Lebanese adapt to a vacuum in Baabda, they can also adapt to vacuum in Parliament, at the Prime Minister Office, the Patriarch seat including other religious representations, government institutions as well as all political leaders who have contributed to the present chaos..

Cont.
Do not fear the term Vacuum, it is synonymous with cleansing and Dirt Removal. Lebanon deserves a younger fresh political representatives, capable of easily communicating among each other and not bogged down by old feuds.