Salam: We Won't Allow a Bunch of Terrorists to Take Tripoli Hostage 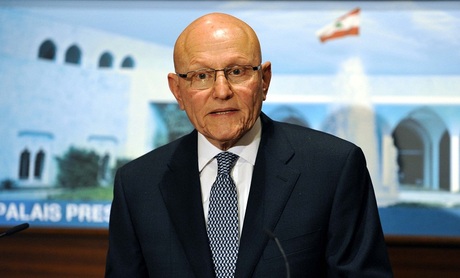 Prime Minister Tammam Salam stressed Saturday that authorities will not allow “a bunch of terrorists” to take Tripoli hostage, in the wake of fierce clashes between the army and Islamist gunmen in the northern city.

“Following the successful security operation that the army carried out in Dinniyeh, which spared Tripoli and the North dangerous terror attacks, the Lebanese were surprised by a series of security violations and attacks on the army and security forces in the capital of the North,” Salam said in a statement.

He noted that the unrest is aimed at “spreading chaos, undermining stability and taking Tripoli and the neighboring areas back to the state of disorder that prevailed in the past.”

But the prime minister underlined that “the government will not be lenient with any attempt to turn the clock back in Tripoli and will not allow a bunch of terrorists to take Tripoli's residents hostage and jeopardize their security for objectives that do not serve the interests of Lebanon and its unity and stability.”

The government “will not turn a blind eye to any insult against the state's image and its military and security institutions under any slogan,” Salam added.

He also hailed “the high level of national responsibility shown by all of Tripoli's leaders and figures, which reflects the true essence of Tripoli – the city of peace, coexistence and knowledge.”

“The army and security forces are performing their duties with full support from the political authority, in order to restore security in Tripoli and the rest of regions under the scheduled security plan,” Salam emphasized.

Two civilians and two gunmen were killed as 20 troops and civilians were wounded in armed clashes in the old souks of Tripoli that erupted Friday evening and continued until Saturday afternoon.

Cautious calm engulfed the area after a mediation by the Muslim Scholars Committee led to the withdrawal of the militants from the streets, state-run National News Agency reported.

But military sources stressed to LBCI TV that the army will press on with the battle against the gunmen regardless of “what some parties are trying to do.”

Meanwhile, two army soldiers were killed and several others were wounded in an armed attack that targeted a military vehicle Saturday in the Akkar area of al-Mhammara, which was followed by clashes with the gunmen.

kindly question the traitor miqati about his financial support to this group of terrorists.

Give the army a free hand to once and for all do away with those attempting to undermine peace in Tripoli. That said, also understand that extremism begets extremism and HA jihad is no less extremist than those thugs of Tripoli. HA too must ultimately be disbanded and the army and state must rain supreme. This is our only salvation.

These articles are boring ya Naharnet. We're waiting for the great interviews and press conferences by the FPM. Those are the best articles

But they already took Tripoli hostage, for many years now!