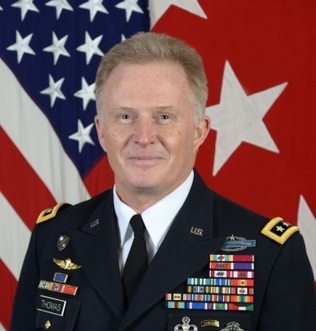 Lieutenant General Raymond Thomas III, a senior official in the United States Army, arrived in Lebanon for a brief visit, An Nahar newspaper reported on Wednesday.

Thomas, the commander of Joint Special Operations Command, arrived in Lebanon at the head of a military delegation.

The purpose behind the visit is still unknown.

Last week, media reports said that Army General Martin Dempsey, the chairman of the Joint Chiefs of Staff, is expected to arrive in Lebanon during the upcoming days.

Earlier this month, Qahwaji attended a meeting for military leaders from more than 20 partner nations in the coalition against the Islamic State of Iraq and the Levant (ISIL).

However, a sharp debate emerged locally on whether Lebanon should enter the coalition and if its territories would be used to launch attacks on jihadists in neighboring country Syria.

John Allen, a retired four-star general and U.S. envoy to the coalition fighting Islamic State group, was expected to include Lebanon on his tour to the region.

Allen kicked off a visit to the Gulf countries on Monday.

ask your resistance to give some of what it has to the LAF, it might help.

@ marcus.. with all due respect i dont go with z stupid game of m8 or m14, as i m neither fan of this or that camp.
What is important to me, as it should be to all Leb---One Lebanon, under One Leb Army, justice & equal for all?? capice..

however much we all like the US, and would love to be under the protection of the US, reality is that the US hasn't been very loyal to us in the past 40 years, and left us at the throes of the assadist project.. I feel that american's attitude towards Lebanon changed in 2005 when they saw 1.5 Million people clamoring their want of freedom. I hope the attitude change is real and will be consistent.

The world is finally paying attention, the Lebanese Armed Forces are doing a wonderful job against ISIL with a lot less logistics. The time has now come for the US and the West to start providing what the army needs and at the earliest otherwise ISIL could well land there in the US or the West sooner than feared. Help us finish this monster ISIL and stop wasting time.