Berri to Schedule Session on Extending Parliament's Term Next Week 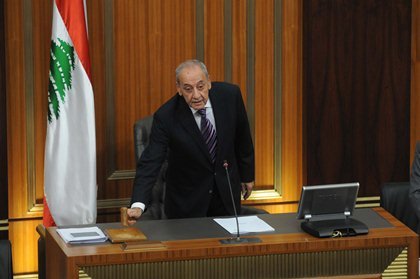 Speaker Nabih Berri announced on Wednesday that he will call next week for a session to extend parliament's term.

He made the declaration during his weekly meeting with lawmakers at his Ain el-Tineh residence.

Earlier, the speaker had stressed the need to respect the principles of power-sharing among the political powers regarding the extension, reported the daily An Nahar on Wednesday.

He will not waver in applying these principles, added the daily.

Berri had relayed this message to Free Patriotic Movement leader MP Michel Aoun and Lebanese Forces MP George Adwan, who had held separate talks with him on Tuesday.

The speaker is expected to emphasize these positions during a parliament session dedicated to the extension, which he will call for at the beginning of November, reported al-Joumhouria.

He stressed to Aoun and Adwan the need for Christian blocs to attend the session, “because power-sharing should be applied to all sides.”

The FPM and LF reject the extension of parliament's term.

Failure to extend the term will lead to the failure to hold the parliamentary elections, which will consequently lead the country to vacuum that will in turn make it impossible to elect a new president, reasoned Berri.

In addition, he explained that he had changed his position on the extension after he realized that some sides will oppose holding the parliamentary elections without the extension.

Parliament extended its term last year over security fears and a disagreement among rival MPs on an electoral law.

The Mustaqbal Movement of the March 14 camp had voiced its support for the extension, while its allies, the LF and Kataeb Party, oppose it.

The FPM, of the March 8 camp, also rejects the extension, while other blocs within the alliance support it.

Marada Movement leader MP Suleiman Franjieh, of the March 8 camp, had announced on Tuesday his backing for the extension, saying that staging the polls would be difficult during this critical phase.

I find no reason for my banning from posting?!

don't worry FT, I am voting them down as much as I can. I have many many accounts but now I am laying low because they seem to be deleting any new accounts I make. Hang in there my friend

Mr. Berri let's put aside all this sweet talk about parliamentary life, what is your militia doing on the streets of Beirut fully armed
عضلات عسكرية في عاشوراء
http://www.annahar.com/article/184447-عضلات-عسكرية-في-عاشوراء-حركة-أمل-لالنهار-أبلغوا-القوى-الامنية-عنهم

I read "Berri Seeks to Respect.." and I began to laught, this is a work of fiction no doubt.

FPM receives its orders from outside Lebanon.

I thought the majority of PMs (especially Berri's who said he STRONGLY OPPOSES any extension)are against extension. Watch how magically enough PMs will show up to have a quorum and approve the extension. Why not make this session to also elect a President since enough of them will show up?

Mr. Berri, the time has come for you to start preparing for the session whereby your exit strategy will be unveiled, your exit of parliament and form our lives once and for all. Degages!!