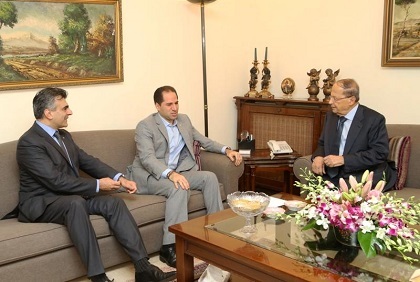 Gemayel described his meeting with Aoun as “excellent,” pointing out that the circumstances compelled him to head to Rabieh.

“If we don't meet during these circumstances, then when will we?” Gemayel wondered.

The MP revealed that he tried to convince Aoun to attend Wednesday's parliamentary session, which is set to elect a new head of state, but “he (Aoun) refused.”

Hizbullah and Aoun's Change and Reform bloc have been boycotting electoral sessions at parliament due to a disagreement with the March 14 camp over a compromise presidential candidate.

Geagea, a presidential candidate, had previously accused them of adopting such measures in to order to blackmail political blocs into electing Aoun as president.

Gemayel discussed on Tuesday with Geagea the latest developments in Lebanon and the ongoing presidential vacuum.

The Kataeb MP slammed the expected extension of the parliament's term as “unacceptable.”

Probably not the food. I remember vaguely a quote from the late Sheik Khaled who said that he had just had one of the lousiest meals ever, but with the most humble person. Of course, everyone that uttered that during the days of the Syrian hegemony in Lebanon consequently put a price on their head. Allah yer hammo

Why not Humble, Samy is good. So is Demianos Kattar, so is Ziad Baroud, all of them young, energetic, visionary and clean from the sludge that the old guys are riddled with.

Sami, you're a good guy and your efforts will not go unnoticed. keep up your good work, even if I still do not trust the old man Aoun, keep up the bridges open with him, Frangieh, Geagea, let's have peace, cohesion and synchronization between all the Christians of Lebanon, once that is done, then continue your good work to cover all the Muslim partners, Shiite, Sunni, Druze, let there be only ONE Lebanon for all the Lebanese. Enough divisions, enough distrust, enough hatred, all we want is peace and hope. But tell old man Aoun that The Phoenix asks him to drop the seat, yes the seat, there are younger people a lot more capable than him and Geagea.

OK @Defacto, how about then people like Demianos and Ziad?

Why was the meeting excellent when Aoun refused to end the boycott? Was the ahwe good? Or was it Aoun's war stories