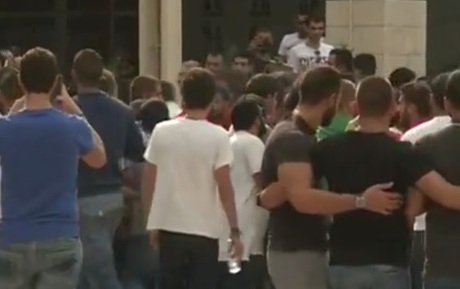 Two brawls erupted Wednesday at the Notre Dame University in Louaize between students belonging to the Lebanese Forces and others from the Free Patriotic Movement.

LBCI television said the two-phase clash broke out over the issue of “raising electoral banners, two days ahead of the scheduled student elections at NDU.”

The polls will be held for the first time in three years after the FPM decided to end its boycott.

“The scuffle started outside the engineering faculty before it escalated into into a bigger fistfight in the middle of the campus,” LBCI said.

University security guards then intervened and managed to contain the brawl, the TV network added.

The FPM's website said several students were injured in the clash as the LF's website accused the rival students of starting the fight “because they were not able to withdraw their nominations” before the deadline.

I say postpone the elections and extend the tenure of the previous winners.

This is the way it is done in lebanon. Lachou new elections?

Caporal is dividing the christians and History will explain the role of this traitor.

no elections should be held in universities.

"The polls will be held for the first time in three years after the FPM decided to end its boycott."
LOL those FPM are boycotting everything these days. well, who blames them? an armed militia has got their backs.

"The scuffle has shown the level of ignorance spread among the youths". No The fact that samir geagea is president material is the pinnacle of ignorance (not that aoun is that much better).