Army Continues Crackdown in Tripoli, Akkar amid Raids near al-Beddawi 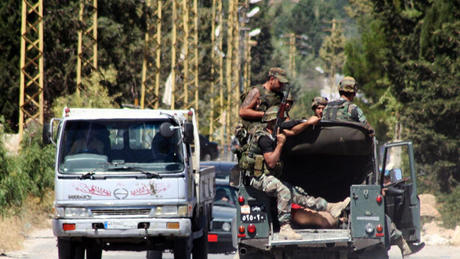 The army on Sunday conducted a major crackdown in the vicinity of the al-Beddawi Palestinian refugee camp near Tripoli and in other areas in the North.

Military units “carried out a major crackdown around the al-Beddawi camp in search of gunmen and fugitives, while raids were made in several suspicious locations,” the army said in a statement.

Army forces “staged patrols and erected checkpoints and surveillance points in all these areas,” the statement added.

The army said its steps are part of the “continued security measures in the neighborhoods of the city of Tripoli and the Akkar region.”

Earlier, the army detained in a raid in the town of Bhannine in the Akkar district two men involved in the recent clashes in the area and confiscated a rocket propelled grenade and military equipment.

The army command said in a communique issued late on Saturday that a “military unit carried out raids on several suspicious areas in (the northern district of) Minieh and Bhannine and arrested Toufic Mohammed Akkoush and Mohammed Ahmed Akkoush, who were involved in the shooting at soldiers in the town of Bhannine.”

The statement added that a Lebanese national and two Syrians were also detained, without revealing their identities.

“An RPG and a quantity of military equipment were seized near the town's technical school,” the army continued.

The suspects along with the confiscated weapons were referred to the competent judicial authority, the statement said.

Gunmen led by Islamist militant Sheikh Khaled Hoblos, a previously unknown cleric, engaged in deadly clashes with the army last weekend in the town of Bhannine.

The clashes in Bhannine and al-Mhammara coincided with unprecedented fighting between the army and Islamist militants in Tripoli's old souks and Bab al-Tabbaneh neighborhood.

God Bless the Lebanese Army, may he always give them strength to win against their enemy.

May every single square inch of Lebanese territory be cleaned and come under the Lebanese Army's control, full control, every single inch, Inshallah.