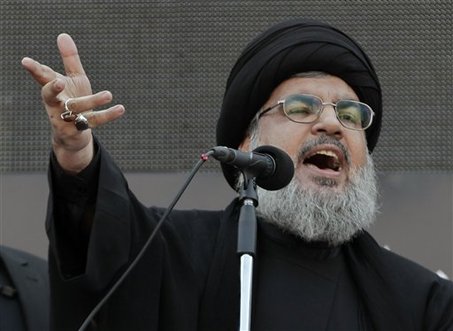 Lebanese officials have welcomed Hizbullah leader Sayyed Hassan Nasrallah's speech amid hopes that it would lead to dialogue among the country's rival parties.

“The country needs positive rhetoric more than any other time and this is what I saw in Sayyed Hassan Nasrallah's” speech, Progressive Socialist Party leader MP Walid Jumblat told As Safir daily published on Tuesday.

The Hizbullah secretary-general sent “positive signs, which I hope would lead to constructive dialogue to protect Lebanon,” said Jumblat.

During a speech marking the tenth night of Ashura in Beirut's southern suburbs on Monday, Nasrallah lauded al-Mustaqbal movement's stance on the recent deadly clashes between the army and Islamist gunmen in the northern city of Tripoli and nearby areas.

He said the national stances of al-Mustaqbal and Sunni leaders spared Lebanon “a big disaster.”

“We might have very different viewpoints on the regional affairs and things might reach the extent of rivalry and animosity, but our morals oblige us to take the right and patriotic stance and to thank them and appreciate them despite our differences,” added Nasrallah, expressing willingness to engage in “dialogue” with al-Mustaqbal.

Al-Mustaqbal parliamentary bloc leader MP Fouad Saniora preferred to wait until he reads the speech, to comment on it, As Safir said.

But an official close to Lebanese Forces chief Samir Geagea, the March 14 alliance's presidential candidate, described Nasrallah's speech as “consensual and not aggressive.”

Nasrallah opened the dialogue door to the presidency and announced on behalf of the March 8 alliance that its candidate is Aoun, said the official, who was not identified.

This means that the Hizbullah leader extended his hand to the March 14 alliance to hold dialogue on a compromise candidate, he said.

“If Nasrallah insisted on backing Aoun's candidacy, then he should stop paralyzing the parliament and head to the legislature to elect Aoun,” he said about Hizbullah MPs.

The Baabda Palace has been vacant since the expiry of President Michel Suleiman's term in May. The rival MPs failed to elect a new head of state over their differences on a compromise candidate.

The majority of the March 8 camp's lawmakers have boycotted the sessions over their claim that there should be consensus on a candidate first. But their boycott was a clear sign of their rejection of Geagea's candidacy.

He now says M8 has a candidate for the presidency. Why doesn't he urge (order) them to head to parliament and vote for him. M14 has Dr. Geagea. Let them battle it out in the first round, and then there is a second round.

that's common sense you're talking about. He lacks that and some more

and that's why you create fake accounts every day and insult others?

You forgot to mention that this 'Positive, Consensual' speech included threats to bomb every square inch in Israel.

Disco. No not all sunnis, infact not even 3% will be the ones that follow these terrorists ..but for sure 95% wantto see hizbola be lebanese party rathar than an iranian agenda.

Are you sure you are ok ? We are not into another scam, raise the tone to show how bad we are? Shia sunni are welcome. No need to fake it.

Agree with southern, just do not bring iranian or arabic agendas to control the free Lebanese spirit. Christians made lebanon with the druze, not for sunni noe shi3a to control it, leave the people from east and west meet here and forget abut basadran police or the saudi (amer bil ma3roof..) and all what they do is opress people so the come here to Lebanon to enjoy few days of vacation free from any authority. EXCEPT Democratic rule.

No Southern, "freedomarch" was too busy immigrating to the West.

Lebanon started with the mountain of Lebanon made b6 mainly Christians and druze, but what is important is the free spirit of christians who made Lebanon open and free, yes shi3a and sunni made it a great lebanon, but still don't you like what makes us different than our arab neighbors or even iranians? Life loving open to markets and be pioneer in innovation and academic achievements.

Hassan camel assabah was able to do wonders under Lebanon and under his sect, also when he was given the tools in the US. Not under his sect.

Nasrallah is genuinely on the ropes. HA fighters are currently in Syria, at Aleppo, Idlib and along the Syrian Lebanese border, as well as the suburbs of Damascus. They are also in Iraq defending the Iranian backed regime there. The last thing Hezbollah needs now is to fight the Nusra front in Akkar and Tripoli. His fighters are already stretched too thin, to the point of inviting Israel into the south to do damage to his infrastructure. He needs Mustaqbel to support the Army as it deals with Syrian rebels inside Lebanon. Without the Sunni cover, Lebanon would blow up in Nasrallah's face due to his stupidity in joining the Syrian War on the orders of his masters in Iran.

Of course, the Mustaqbel is not supporting the Army to save Hezbollah, but to save what is left of the State and its constitutional institutions such as the Army and Security Forces.
The best thing that can be done to save the State is to restore legitimacy to its institutions. Elect a President; let the care taker cabinet of ministers resign and appoint a new PM and Council; and hold Parliamentary elections ASAP.
This "best thing" Nasrallah will never agree to. He wants to keep the state prostrate so as to give his idea of Lebanon a chance to see the light of day. And his ally in this is the idiot Aoun and his mindless Aouni followers.

Indeed this speech was legendary, like all the other speeches he makes. More Lebanese are now aware of the current situation.