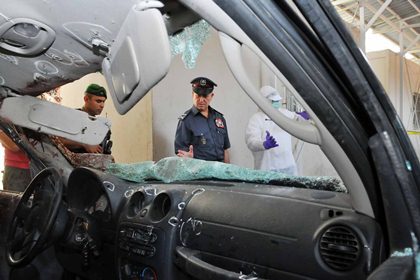 The Internal Security Forces killed two accomplices of the alleged mastermind behind the kidnapping of seven Estonians during clashes in the area of al-Bireh in Rashaya at midnight, media reports said Tuesday.

The National News Agency said the two men were killed at around 12:30 am after the ISF put iron barricades on a road between al-Bireh and Izza to stop their four-wheeler. But their vehicle veered off its course and hit a wall.

An exchange of gunfire ensued between the ISF and the armed men. The wanted criminals were killed while a Major and another member of the patrol were injured.

Speaking on condition of anonymity, a security official told AFP that one of those who died in the shootout was Lebanese and the other was Syrian.

The media reports had said that the mastermind behind the kidnapping Wael Abbas was among the dead but later Voice of Lebanon radio station (93.3) identified the two as Abbas’ aide Mohammed Zarifi and Kanan Yassine.

Interior Minister Marwan Charbel told LBC TV network that the men were part of a gang that was planning to kidnap other foreigners.

He vowed the security operation would continue until the kidnap gang was nabbed.

"We will continue to hunt them down," Charbel said.

The media reports said that security forces and the Lebanese army were coordinating efforts to find six other suspects.

The gang is allegedly linked to another network specialized in kidnapping foreigners in Iraq.

The ISF said in a statement later on Tuesday that the two suspects’ vehicle contained weapons, hand grenades, a mask, and documents belonging to robbery victims.

The ISF also raided one of the suspects’ apartments where they found more weapons and hand grenades, as well as Tasers and other equipment.

On Friday, two Intelligence Branch officers were injured when they were ambushed by armed men in the hunt for the kidnappers of the Estonians in the village of Jlala near Shtaura.

The seven Estonian cyclists were freed in Lebanon in July, almost four months after armed men abducted them as they entered the country on a bicycle tour from Syria. The abduction has not been officially claimed.

Just as I predicted, more will end up dead or not caught so that Ashraf Rifi will cover up his crimes.

If rifi was incompetent, he would have been removed. The incompetence lies with the GREAT MARWAN CHARBEL! Ya Marwan!! Who are these people?? Who is Abbas?? Who is behind them?? Who finances and trains them?? What was the purpose of the kidnaping?? How much more of them are they?? Helloooooooooooooooooo....???

I would add Patriot who did the ransom paid go to???
They're only good at catching peaceful honest Syrian opponents alive and handing them over to their butchers'!

Marwan charbel understands well the law of terrorism that is reigning actually. It is obvious that his main job is to protect Hezbollah and cover up their acts. The evident case of Antelias is a perfect example of fascim. Two men intended to blow a parking in the middle of the day, killing innocents, because of "financial problems". The tag "financial problem" is aimed to close the case and end to judiciaries, while major questions are still without answers. Are these two guys on their first act? Don't they likely have a heavy past? Two simple citizens can take such criminal decisions? For Marwan Charbel these questions are not important since the motive of the crime is known :).

they have to be killed to cover bashar and hassoun

Do you also live in a cave or are you the only living thing on earth who does not know who was responsible for the crimes???

As for Nahr el bared... I guess you never heard about Shaker el Abssi and his master trainer...the GREAT BASHAR!!!!

Man, I cannot waist my time answering all the retards here...