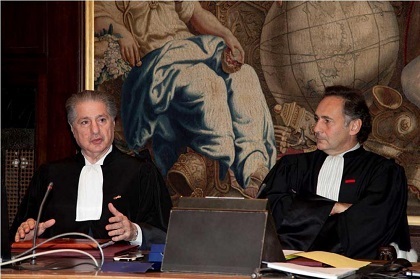 Kataeb Party leader Amin Gemayel has reiterated that the most important form of legislation is parliament's election of a new head of state, blaming the presidential vacuum for the extension of the lawmakers' mandate.

“The first necessary legislation lies in the election of a president,” Gemayel said during a visit to Paris.

“The presidential vacuum is a clear violation of the constitution, the National Pact and coexistence,” he said.

“Those who are scared of vacuum and are keen on democracy, should elect a president,” Gemayel, who is a former head of state, added.

The Kataeb chief refused to back the officials who “contributed to the paralysis” of state institutions.

The vacuum at Baabda Palace “is the major reason for the extension of parliament's mandate,” he stressed.

Lebanon has been without a president since May. Rival MPs have been unable to find a successor to ex-President Michel Suleiman over their differences on a compromise candidate.

Fears that the vacuum at the country's top Christian post would spill over to other institutions have compelled the majority of MPs at the parliament to agree on the extension of their term.

Gemayel spoke before the legislative session on the extension. Kataeb MPs have declared they would boycott it.

Some are claiming if parliamentary elections were held amid a vacuum in Baabda, the government would become illegitimate because the constitution states that the head of state should name a new prime minister to form the cabinet.

During his visit to Paris, Gemayel called for the strict control and monitoring of the porous Lebanese-Syrian border.

“The border is a source of concern and danger on Lebanon,” he said.

Jihadists from al-Qaida-linked al-Nusra Front and the Islamic State group are entrenched in an area that lies on the border between the two countries.

They overran the northeastern border town of Arsal in August and engaged in bloody gunbattles with the Lebanese army.

They also took with them hostages from the army and police and executed three of them.

You are no good. Everything happening today is because of your errors when you were in power.

His biggest error was handing over the government to Aoun

I am usually pro kataeb more than LF. But in this case the only honest christian party was LF. The others are just trying to gain poplularity. Because it is a catastrophe to do legislative elections if there is no president.

nice picture are they having lobster?

What you are saying is truly right.

Today I was happily surprised by the declarations of Sleiman Frangieh which showed he is a true christian.