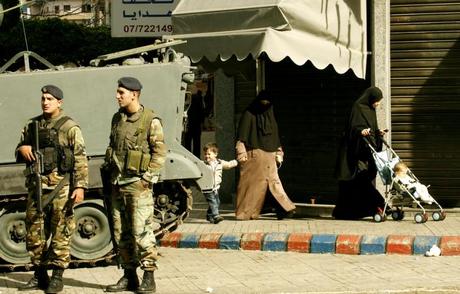 The army on Wednesday arrested a number of suspects in the northern district of Dinniyeh, the southern city of Sidon and the Bekaa towns of Taanayel and Brital.

"As the army carried out security measures in the outskirts of Dinniyeh, troops arrested six Lebanese men and a Syrian on suspicion of belonging to terrorist groups, after finding on their mobile phones terrorist pictures and voice records related to inciting against the army and monitoring its patrols," the Army Command said in a statement.

In an earlier statement, the army said it "raided wanted men in Sir al-Dinniyeh and seized weapons and military equipment in the house of Adnan Hussein Abdullah Khodr.”

The army has been carrying out several raids in Dinniyeh and has arrested several suspects, including Ahmed Miqati who was planning for terrorist acts in the North district.

Meanwhile in the South, "the Palestinian Mahmoud Mohammed Dahshan and the Lebanese Mohammed Ismail al-Naqib were arrested in Sidon for belonging to armed groups and plotting terrorist acts,” the Army Command said.

Elsewhere, state-run National News agency said "a patrol from the army intelligence arrested four people who were in a black Grand Cherokee in Taanayel.”

“Four people from al-Rashaini family were arrested for possessing weapons and hand grenades in Taanayel,” the Army Command announced later in the day.

“They were monitoring a person to kidnap him,” it added.

The four men were taken for interrogation, NNA said, identifying one of them as G. R.

Separately, security forces seized “machines for manufacturing Captagon and other narcotic pills in raids on the houses of A. A. M. and W. W. M. in Brital,” said NNA.

The machines and the narcotic pills were confiscated.

Separately, security forces seized “machines for manufacturing Captagon and other narcotic pills in raids on the houses of A. A. M. and W. W. M. in Brital,” said NNA.

-..flamethrower..
everytime naharnet hides the name of a suspect, be sure it's an M14er with ties to mustahbal.

This is called a poster's credibility.

now it is time for the army to be really patriotic and start rounding up the other extremist terrorists , i.e. hizbushaitan and their affiliates.