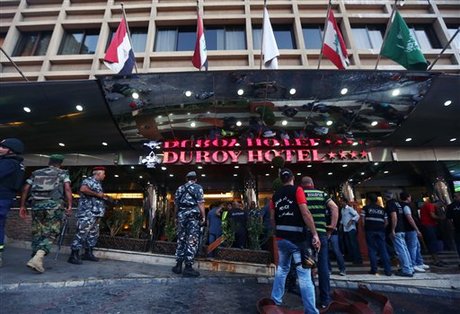 Abu Ghida indicted a Frenchman, originally from the Comoros islands, who was arrested in June during a raid on the Napoleon Hotel in Beirut's Hamra district.

He was accused of plotting to target hospitals and high-ranking security officials.

A Saudi terrorist, also indicted on Friday, was arrested in June after his accomplice blew himself up at the Duroy Hotel in Beirut's Raouche district to evade arrest during a raid carried out by General Security members.

They were plotting to target al-Saha Restaurant in Beirut's southern suburbs.

The detainee has admitted to belonging to the Islamic State of Iraq and the Levant.

Abu Ghida's indictments include calls for the death penalty or the execution of 28 terrorists, among them the French and Saudi detainees.

The rest of the terrorists have Lebanese and Syrian nationalities.

we thought there is no terrorists in Lebanon ?!!!!!
n est ce pas Monsieur Rifi

The Caporal must be taken to court for "high treason".

but I've heard of an iranian one before

After getting all needed info from all these terrorists, they should be hanged...no mercy..

But I thought Rifi said they didn't exist in Lebanon?