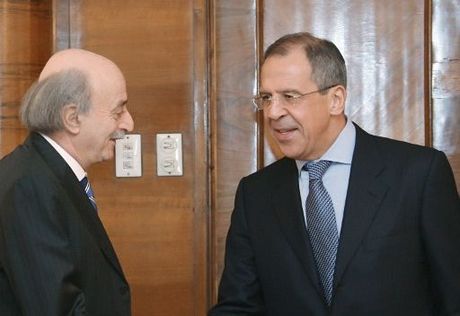 “I explained to Lavrov that we failed to elect a president due to some political disputes and he expressed his concern over the issue,” Jumblat said in remarks to Al-Arabiya television.

In another interview with Russia Today television, Jumblat noted that “Russia is keen on stability in Lebanon,” reminding that “there are historic ties between Russia and Lebanon, and between me and the Russian officials.”

And while admitting that the extension of parliament's term was an “unpopular” move, Jumblat called for drafting a “modern electoral law.”

Separately, the Druze leader pointed out that al-Mustaqbal movement “has proved that it is against extremism in Lebanon.”

Jumblat also described Israel as the “real terrorism” in the region.

Bogdanov then threw a lunch banquet in the honor of Jumblat and the delegation at noon.

Meanwhile, the PSP reiterated in a statement that Jumblat's Moscow agenda does not include a meeting with Russian President Vladimir Putin.

Jumblat had met Thursday with Aleksey Pushkov, head of the foreign affairs committee in the Russian Duma.

Moscow has been playing a key role in the Middle East in recent years, especially through its vital support for the embattled Syrian regime, which is opposed by Jumblat.

Russia has also said it refuses to join a U.S.-led international coalition against the extremist Islamic State group in the absence of global consensus on the military operation.

MP Jumblat to Al-Arabiya: I explained to Lavrov that we failed to elect a president due to some political disputes and he expressed his concern over the issue.

Which one is Lavrov???

14 minutes ago MP Jumblat to al-Manar: No one cares for Lebanon at the regional level, so let us care about Lebanon.

that's what Lavrov told him.

At least he can meet a FM....unlike our wazwaz imbassil who has zero consideration....