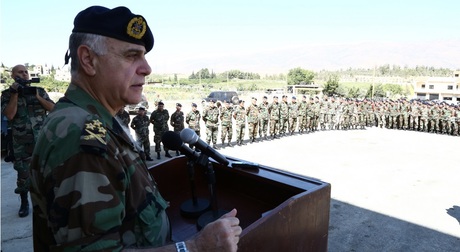 Army chief Gen. Jean Qahwaji has lauded the residents of the northern city of Tripoli for cooperating with the military in its fight against terrorists.

He hailed the coastal city's residents for showing an “exceptional cooperation” with the army in confronting extremist groups.

Last month, an armed militia clashed with the army in Tripoli and Akkar district. The gunbattles left dozens of fighters, soldiers and civilians dead and injured.

The clashes erupted after the army carried out a raid in the town of Assoun in the northern district of Dinniyeh during which it arrested Ahmed Miqati, who has admitted to plotting a ground offensive along with accomplices from the Islamic State of Iraq and the Levant to control vast territory in northern Lebanon and establish an emirate there.

According to al-Mustaqbal, Miqati's aide Ghali Haddara made similar confessions.

Qahwaji told the daily that during the clashes between the army and the terrorists in certain areas in Tripoli, “not a single bullet was fired on the army from other neighborhoods in the city.”

“This was a clear sign” that Tripoli backs the army and the state, he said.

History will remember Qahwaji as a Heroe. God bless the Army !!!

General Qahwaji is doing a great job, God bless him and God bless our army.

bro, he sure is doing a great job! Most if not all army generals in the world sit by and watch an armed militia cross over into another country bro to wage jihadist duty bro.

but...but.... m8ers say tripoli should be erased! that tripoli is just a city of terrorists! LOL