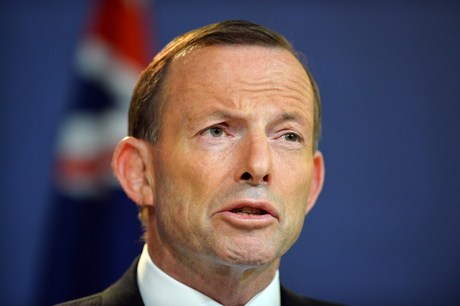 Australia said Thursday it is tracking four Russian navy ships off its north coast, a move Prime Minister Tony Abbott said was a sign of Moscow's military assertiveness with relations strained after the downing of Flight MH17 in Ukraine.

The appearance of the fleet coincides with Vladimir Putin's arrival at the G20 summit in Brisbane this weekend and follows a highly anticipated exchange between the Russian leader and Australian premier Tony Abbott in Beijing.

Putin's presence in Brisbane was questioned given Australia's anger at the downing of Malaysia Airlines flight MH17 in July, in which 298 people died in rebel-held eastern Ukraine, including 38 Australian citizens and residents.

But the G20's consensus was that he should attend despite Kiev and the West claiming the plane was blown out of the sky with a missile supplied by Russia, an allegation Moscow denies.

"Defense is monitoring Russian naval vessels that are currently transiting through international waters to the north of Australia," the Australian Defense Force said in a statement.

Australian media reports said they include a "heavily armed" cruiser and destroyer, a tug boat and a refuelling vessel.

John Blaxland, an international security expert at the Australian National University, said having ships off Australian waters was "huff and puff" by Putin designed to reinforce his "tough, he-man image".

"This is a show of force, a stage-managed event and is all for show," he told AFP.

"People don't go around doing this unless they feel insecure and need to assert themselves. It's consistent with Putin's chest-out, posturing behaviour. It bolsters his domestic credentials."

Abbott famously vowed to "shirtfront" Putin -- an Australian Rules football term in which a player charges an opponent -- in Brisbane over the downing of MH17.

The pair met on the sidelines of the APEC summit in Beijing this week without incident.

"It's not unusual for Russians to deploy in the vicinity of major conferences and let's not forget that Russia has been much more militarily assertive in recent times," Abbott said Thursday in Myanmar on the sidelines of the East Asia Summit.

"So, it's not really surprising and we are doing what you'd expect us to do. We are carefully monitoring the movements of these ships when they are in Australia's approaches."

Former Australian army chief Peter Leahy, now director of the National Security Institute at the University of Canberra, said the naval deployment was a "less than subtle demonstration of power".

"I rather think it's likely to be pre-planned and it's more associated with the G20 meeting in Brisbane rather than the comments from the prime minister," he told national radio.

"But I think Russia is sending us a message. And as I've said, it's less than subtle, but it's saying it's a maritime power, it's got global reach, it's got interests in this part of the world."

"So we have been aware of it for some time. We've been tracking it and as far as I know, they remain in international waters, she told reporters, without specifying the ship's exact location.

The U.S., a key Canberra ally pursuing a "rebalance" to Asia, now rotates hundreds of marines to Australia's north, a region seen as strategic to countering China's growing military might and territorial claims in the Pacific.

G20 leaders, including U.S. President Barack Obama, meet in Brisbane on Saturday and Sunday with boosting global growth the main theme, although Ukraine is also expected to be discussed.

As tensions over Ukraine have spiraled, the Soviet Union's last leader Mikhail Gorbachev warned last weekend that the world was on the "brink of a new Cold War".

A recent study of Russia-West military incidents catalogued dozens of dangerous encounters this year -- almost all of them linked to air and naval war games in different parts of the world including the Pacific.