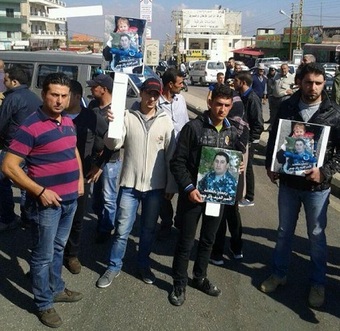 The captors of the Lebanese troops and policemen threatened Sunday to murder seven of them if Lebanese authorities enforce recent life imprisonment sentences against a number of Islamist inmates at the Roumieh prison.

“The wife of the abductee Khaled Moqbel Hassan received a phone call from the captors, who threatened to kill 7 servicemen if life imprisonment sentences against 5 Roumieh Islamist inmates were not revoked,” LBCI TV reported in the evening.

As the news broke out, the families of the captive troops started burning tires at the Riad al-Solh Square in central Beirut, where they have been observing a sit-in since several weeks.

The emir of the Qaida-linked al-Nusra Front in Syria's Qalamun region has refused to discuss the Lebanese cabinet's response regarding the demands of the group to release the abducted soldiers and policemen.

According to the Kuwaiti al-Qabas newspaper, the so-called emir informed the Qatari-appointed mediator, Syrian national Ahmed al-Khatib, that the group rejects to tackle the Lebanese proposal.

Al-Nusra and the Islamic State groups have been holding several troops and policemen hostage since August 2, when they overran the northeastern border town of Arsal and engaged in bloody clashes with the army.

The two groups have since executed three troops and threatened to murder more hostages if Lebanese authorities don't fulfill their demands.

Nusra said that the three-month hostage crisis would end if 10 inmates held at Lebanese prisons would be freed for each hostage or seven Lebanese inmates and 30 female prisoners held in Syria would be released for each abducted soldier and policeman or if five Lebanese and 50 women inmates would be freed.

Meanwhile, some families of the abducted servicemen continued to visit their sons. The family of captive soldiers Mohammed Youssef and Hussein Ammar have recently met with them separately in the outskirts of Arsal, a day after the family of soldier Khaled Hassan also met with him.

Media reports had said that the Islamist captors of the servicemen have agreed to allow their loved ones to visit them.

According to the pan-Arab daily al-Hayat published on Sunday, the mother of Ammar, his brother and uncle and the wife of Youssef and his mother headed to Arsal on Saturday morning to meet with the two abducted soldiers.

Gunmen reportedly transferred the two families to meet their loved ones.

Ammar informed his family during the 10-minute meeting that the jihadists are forcing them to dig tunnels, adding that the gunmen accused Hizbullah of impeding the negotiations.

He added that strikes by Hizbullah, the Lebanese army and the Syrian army are forcing the jihadists to continuously change their whereabouts.

Unfortunately for these captives, your Security should not negotiate with kidnappers or terrorists. They cannot be trusted and they cannot deliver on any promises they make because they cannot control the other criminals that they are associated with. In short, they can guarantee nothing except murder, so they are not reliable.. Those in your government who are sympathetic to these kidnappers and their Front should be tasked with securing the release of the kidnapped soldiers themselves and they should pay the price for supporting the process that has allowed and encouraged foreign terrorist kidnappers to take captives in your nation.

Being revolutionary is a cut-throat business.

OK, we shouldn't give these terrorists life sentences, but something like 40 years will be fair enough. So let give them 40 years and get back our boys, or we now need to start thinking of arresting more of them, and weigh them one of ours per hundred of theirs. And if they touch one hair of our boys, we will dry shave a hundred of theirs. This is the only language these evil murderers understand and nothing else.