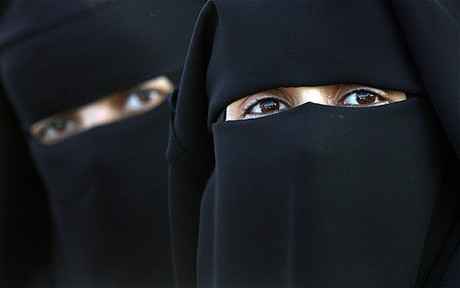 An extremist group formed of veiled females, linked to the Islamic State of Iraq and the Levant (ISIL), is secretly working in several areas in northern Lebanon and spreading the “takfiri salafist ideology,” Ad-Diyar newspaper reported on Monday.

The group is comprised of veiled women who are reportedly recruiting girls in return for large sums of money and convincing them of adopting their ideology.

Sources told the newspaper that the danger of such a group lies in the difficulty of identifying the women wearing niqab, which could cause a sectarian incitement under the pretext of violating religious freedom.

The report continues that the women underwent military and security training and some of them have an experience in sniper shooting and weaponry fields.

In October, media reports said that terrorists are plotting to attack Ashoura gatherings through explosive-rigged cars and female suicide bombers.

The army had reportedly detained Khadija Hmeid, one of the female bombers who were trained to drive booby-trapped cars.

more reports from hired pens such as Ad-Diyar, Al Akbar, and As Safir.

I thought our "Justice" Minister said, that there is no ISIL or Nusra in Lebanon?

Everyone knows that Ad Diyar is very accurate in it's reporting, you all should read their truthful multi article exposé of the corruption and embezzlement of Michel Aoun and his minsters that dates all the way to 1988 till a couple of years ago, google it.

Nothing could be more stupid, taking veiled women to attack unsuspecting people will render them easy pickings in return because one a person from thence on will see a veiled woman, the reaction will kick in, and that means shooting on sight, just like arresting bearded men that Rifi lamented over last week. Fair game.

**Because once a person from thence...**

Remove your veils now! No more niqab/chador/burqas! Cover you hair if you wish but not your faces.

al diyar got the story slightly wrong, it's actually what hezballah is doing in christian and druze town

Women are like a box of chocolates, you never know what you're gonna get.