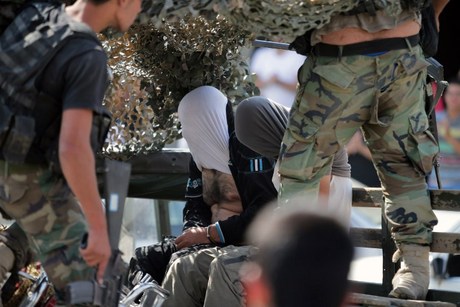 The arrest occurred while the four men were passing in the town, Voice of Lebanon radio (93.3) reported on Monday.

Security sources told al-Manar TV that a Syrian terrorist, Yasser al-Ayrouti, and three others were detained in West Bekaa as they were on their way from the outskirts of the northeastern border town of Arsal.

The detainees are comprised of two prominent leaders from the Free Syrian Army, a leader from the Islamic State of Iraq and the Levant (ISIL), and another from the al-Qaida-affiliated al-Nusra Front.

The military has been carrying out a major crackdown in several areas across Lebanon, the latest in the Bekaa over the weekend, where it kicked off a major security operation.

why should they not?

in every article you have security sources talking to nahar, to mtv, to future, to radio liban, to safif, to al akhbar... etc, it never shocked anyone. but here your brain cells short-circuited on "manar" because you sad drones are programmed this way

"two prominent leaders from the Free Syrian Army, a leader from the Islamic State of Iraq and the Levant (ISIL), and another from the al-Qaida-affiliated al-Nusra Front."

oh.. how surprising! i thought the FSA was the sworn enemy of ISIS&nusra and that ISIS was bashar's creation, also a sworn enemy of nusra&FSA etc etc... yet they hang out together and go on little road trips together?
incredibulous!!

"how surprising! i thought the FSA was the sworn enemy of ISIS&nusra and that ISIS was bashar's creation, also a sworn enemy of nusra&FSA etc etc... yet they hang out together and go on little road trips together? "

you say this as a proof of the binary world you live in... educate yourself and you ll see it is more complex than what your propaganda tells you to say....

hahahahah really peace? that's your answer?
you kept repeating to us that they were enemies and bashar created ISIS to discredit the FSA and whatnot. how does your "nonbinary" mind deal with the contradictions?
again and again we see them collaborating, transferring weapons from one to another, joining forces in attacks, transferring kidnapped hostages, driving around together, making the same statements and taking the same positions, but somehow, it's only because we are not as "illuminated" as you are.
you want to educate yourself? read about your own mental issues:
"In psychology, cognitive dissonance is the mental stress or discomfort experienced by an individual who holds two or more contradictory beliefs, ideas, or values at the same time, or is confronted by new information that conflicts with existing beliefs, ideas, or values.[1][2]"
https://en.wikipedia.org/wiki/Cognitive_dissonance

yes... bashar has created nusra... read a bit, analyze, think... oupps... but you cannot think as elmanar thinks for you, sorry....

so just educate yourself instead of trying to look smart with your 2 cent psychology ....

you simply do not want to face the truth... bad for your propaganda....
but keep telling those against you are stupid to hide your weaknesses....

hey a little hint for your binary mind : in wars things evolve.... alliances change.. you should know that as your syrian friends kept playing that game in Lebanon for 15 years!

oh now it's nusra that was created by bashar (not ISIS anymore?) lol dude, you're such a fool and making such big empty statements dont make you sound smart, to the contrary

just educate yourself mooowaten.... it is all i can say to a lost case as yours...

oh! now FT believes what jumblat says? what a joke you are.... believing him when it suits you and insulting him when it doesn't...
i do not change my mind like you when it suits me... i stick to my positions ... but we know FPMers one day claim that hezbollah and bashar are terrorists but now they side with both... so your credibility? LOL a farce....
you are just a poor desperate idiot, and your posts are making you look like a fool day after day...

lol, probably a HA supporter within the security sources.

really? any proof for that or are you just here to post empty propaganda?

He says the same words as Al Nusra and ISIS. That proofs that most of the M14, are simply Al Nusra sympatizers.

Nothing overjoys me more than the news of our army having arrested more terrorists. The best though will be when the army will begin executing them, of course after having given them a fair trial, but the lamp poles of downtown have the right design for the purpose.

Phoenix, do you also agree with your M14 colleagues, that the LAF is colluding with the Resistance?

of course it is

Lots of "real patriots" we have here aye? Well, I am eager to see Phoenix's reaction to your claims.

Mystic, Some call it cooperation by necessity.

Cooperation indeed, but that LAF a Resistance puppet as our fellow commentators says above. Do you also agree on that?

These kingpin were my nemesis! I'm sad they're gone!!!