Study: Terror Attacks Soar in 2013, Lebanon Among Most Affected 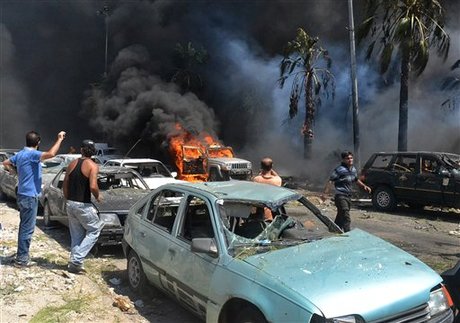 Lebanon came in 14th place as a country most affected by terrorism in a list of 162 nations, according to a new global study.

The London-based Institute for Economics and Peace said Lebanon got a score of 6.4 and joined 8 other countries that saw increased terrorist attacks in 2013 when compared to 2012.

The country witnessed in the past two years a series of bombings and assassinations linked to the war in neighboring Syria that resulted in hundreds of casualties.

The Institute's Global Terrorism Index placed the bombing of al-Taqwa and Salam mosques in the northern city of Tripoli in August 2013 in a list of 50 worst terrorist attacks worldwide.

It reported four groups dominated the attacks — the Islamic State group, Boko Haram, al-Qaida and the Taliban — and were responsible for 66 percent of the fatalities.

The report described the IS as a group that promotes violence to those who do not adhere to its interpretations.

According to the report, Iraq is the country most affected by terrorism, with 2,492 attacks that killed more than 6,300 people. The IS was responsible for "most" of the deaths in the country.

The report said 82 percent of the deaths from terrorist incidents were in Iraq, Afghanistan,Pakistan, Nigeria and Syria.

The institute also said there were nearly 10,000 terrorist attacks in 2013, 44 percent more than the year before.

and among the least affected countries... israel and the US.
look at facts and figures plainly, and you'll know who's really behind it.

Indeed, The parents of terror.

and it's amazing how they admit they are still letting isis export oil through nato member turkey. the article says "they're thinking about stopping it", no rush heh?
http://www.naharnet.com/stories/en/155730-u-n-targets-oil-trucks-to-cut-off-is-nusra-revenues

lol the one about the satanic temple is hilarious

After Rifi was appointed, what can you expect?

make sure to forget the saudis and gulfies, who preach and teach extremism in their schools and madrassas and finance terrorism all around the world.

How many of these terrorist attacks did the Hezbollah false flag Free Sunni of Baalbek Brigade claim responsibility for, someone should ask Hassan Nasrrallah what did the he know and when did he know it.. that is unless Hussein al-Hussein is considered another Hezbollah saint, then it's OK those are untouchable.