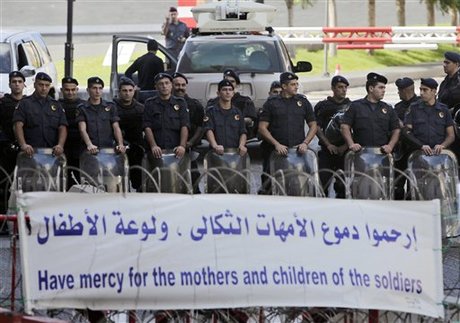 The Lebanese authorities officially informed the Qatari-appointed mediator, Syrian Ahmed al-Khatib, that it had agreed on the jihadists' demand to exchange each captive with five Islamist inmates and 50 female prisoners.

According to al-Mustaqbal newspaper published on Tuesday, the decision came in light of last week's crisis cell meeting.

General Security chief Abbas Ibrahim will reportedly head to Damascus this week to discuss with the Syrian authorities readiness to cooperate in the case.

The Syrian government has reportedly set three conditions to engage in a prisoners swap with jihadists, demanding the Lebanese state to “officially appeal Damascus for help.”

The Syrian government also demanded the Lebanese army not to hand over to the Free Syrian Army the head of its command council, Colonel Abdullah Rifai, and to revive cooperation with the Syrian military in order to control the border and combat terrorism.

The Nusra said that the three-month hostage crisis would end if 10 inmates held at Lebanese prisons would be freed for each hostage or seven Lebanese inmates and 30 female prisoners held in Syria would be released for each abducted soldier and policeman or if five Lebanese and 50 women inmates would be freed.

Concerning threats by jihadists to start killing the captives if the state failed to suspend sentences issued on Friday against Islamist Roumieh prison inmates, ministerial sources told al-Mustaqbal that the threats are “not serious.”

The threats prompted the relatives of abducted soldiers and policemen to briefly block several roads in the capital Beirut and the northern area of Qalmoun on Monday to demand the judiciary to lift sanctions against the Islamist inmates.

Prime Minister Tammam Salam is expected to head a meeting for the crisis cell on Wednesday to discuss the developments in the case.

this is a good news actually. Let those islamists away from lebanese jails and go and get killed in syria.

what if they decide to kill people in lebanon? who's going to take responsibility for that? when assad released islamists in 2011 he hoped it would appease tension, we all saw where they ended up and what they have been doing since.

also, next time they want to free islamists from lebanese jails, what will they do? if kidnapping works for them, they'll keep doing it.

as much as i want to see these servicemen freed safe and sound, i'm afraid giving in to terrorists blackmail will only postpone the problem and make it worse.

Yeah, it was Assad who released Baghdadi too, right? Oh...

And who released Mawlawi?

Good for naharnet to delete words of compassion from the M8 hizbos here .. saying they prefer to see the captive soldiers dead rather than releasing islamists.... agin thanks.

freedomarch > who said that? surely one of your m14 trolls

wow look who's back did they reinstate you FT ?
I wonder for how many days lol

Congratulations. These freed soldiers are more valuable than the inmates that cost money to the taxpayers.

Till the soldiers are freed, because with these people one never knows. But if they want to drag their feet and not return us back our boys, then the solution is quite simple: For every Lebanese soldier kidnapped by Al Jursa or better known as Al Nusra, our authorities should hand over to the families of our soldiers ten of their satanic people held in our jails. Let the families decide where they wish to keep them in detention, I care less where, so if Al Nusra kills one of our boys, then let the parents of our soldiers kill ten of those they keep. In this way no one can blame the state, it would be justice done in the same way they treat our boys. And from now on, anyone who kidnaps a Lebanese soldier, or a Lebanese citizen, let us also give ten to the parents or families of the kidnapped Lebanese, One for Ten. They release one, we release ten, they kill one, we kill ten, simple. Let us see then who will dare touch our people, fair No?

We know for a fact these ppl r going to fight again, even if it's not in Lebanon, and kill scores of ppl. Death is the Islamists stated goals, u cannot bargain with such ppl. It's a huge mistake to give in to their demands. How big can arsal be?! Search for them, attempt a rescue, and let god take care of the rest.