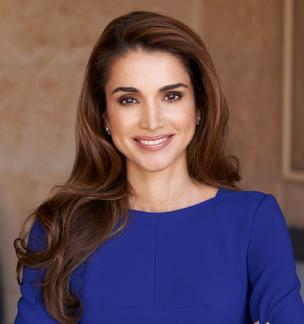 Jordan's Queen Rania on Tuesday urged support for U.S.-led air strikes against the Islamic State jihadist group, saying the future of the Middle East and Islam was at stake.

"Our silence is the greatest gift" for IS, which has seized large swathes of Iraq and Syria, she told participants at a media summit in Abu Dhabi.

"We are complicit in their success," added the queen.

She is married to King Abdullah II, whose Hashemite kingdom has joined the U.S.-led air campaign against IS in Syria along with Bahrain, Qatar, Saudi Arabia and the United Arab Emirates.

"The coalition must be broader... It's the fight for the future of the Middle East and Islam," she said. "It's a fight that we have to win."

She said the fight goes beyond the battleground and is between moderates and extremists worldwide.

"Winning also depends on our ability to conquer the philosophical battleground as well. Because at the heart of this assault is an ideology," she said.

Queen Rania stressed the need for education reform, insisting that the followers of extremist groups are "from classrooms in which they were never challenged to think for themselves, and where they learned an outdated curriculum".

Analysts have warned of the dangers for Jordan because of its participation in the campaign against IS, a Sunni Muslim extremist group that has committed widespread atrocities in areas under its control.

Amman is grappling with its own Islamist extremists, some of whom have joined jihadists in Iraq and Syria.

The United States has also launched bombing raids against IS in Iraq with the involvement of European allies.

Then make your midget husband make up with Assad so the Salafists can be exterminated.

Yeah what Zappa said, in fact Assad hates Salafists so much he could not even tolerate keeping them in his jails not even to finish their sentences, that's mean.

Majority of Middle East Monarchs are silent, in regard of ISIS, due to fear of further exposing Islam.
The fact that ISIS is Openly ruling by the Koran, is terrifying the Muslim world. Saudi Arabia has been acting it for decades, behind closed doors. The Saudis do not post their beheading on YouTube.
Naharnet: Freedom of Speech is what differentiate AnNahar from the rest of the Arab Press; please keep it this way.

Now the Muslim Establishment wants to educate the West about Peaceful Islam, by simply dividing Islam into categories: Extremists and Moderates.
Let it be Clear: There is one Islam, and it is not peaceful nor forgiving. Please refer to chapter 9 of the Koran, it is very clear about killing non Muslims.