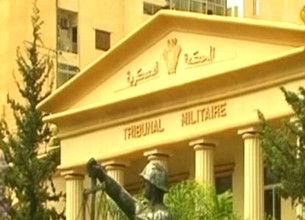 State Commissioner to the Military Court Judge Saqr Saqr handed over the head of the Free Syrian Army command council, Colonel Abdullah Rifai, to the Lebanese General Security without charging him.

State-run National News Agency reported on Tuesday that Rifai was released from custody and will be handed to the General Security after his lawyer Tareq Shandab filed a request in this regard.

NNA said that Rifai was released on condition he does not leave the country.

MTV reported that Rifai was moved from the Defense Ministry to the Justice Ministry.

The military court approved the release of the son of Sheikh Mustafa al-Hujeiri.

Shandab also informed LBCI that the military court approved the release of Baraa al-Hujeiri, who is the son of Islamist cleric Mustafa al-Hujeiri, aka Abou Taqiyeh.

Abou Taqiyeh is charged with belonging to al-Qaida-linked al-Nusra Front.

so long as hizbollaat terrorists terrorize syrians we should expect syrians to terrorize hizbollaat.

lol Mohamad....count till your hearts content....for now stop whining how HA have managed to defend Lebanon from your brothers IS, Nusra.

A political vendetta ! It's good his honor the judge Saqr didn't fall in this trap.

We should have swapped him with the Lebanese prisoner in ASSad jails since the civil war.

CIA and Mossad trained ISIS fighters in Jordan before sending them to Syria. Jordan IS meddling in the Syrian crisis but they are on ISIS's side ( just like Turkey is ) Thats why ISIS doesn't threaten Jordan or Turkey or Israel for that matter.

For every Lebanese soldier kidnapped by Al Jursa or better known as Al Nusra, or Daesh, our authorities should hand over to the families of our soldiers ten of their satanic people held in our jails. Let the families decide where they wish to keep them in detention, I care less where, so if Al Nusra kills one of our boys, then let the parents of our soldiers kill ten of those they keep. In this way no one can blame the state, it would be justice done in the same way they treat our boys. And from now on, anyone who kidnaps a Lebanese soldier, or a Lebanese citizen, let us also give ten to the parents or families of the kidnapped Lebanese, One for Ten. They release one, we release ten, they kill one, we kill ten, simple. Let us see then who will dare touch our people, fair No?