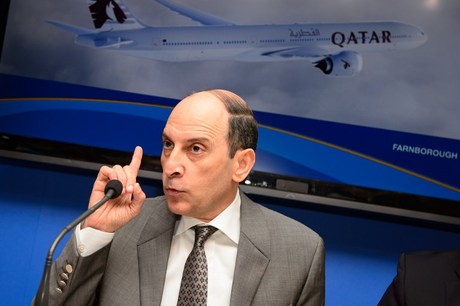 Qatar Airways chief Akbar al-Baker on Wednesday took a swipe at legacy carriers which complain of competition from Gulf carriers, accusing them of being "inefficient" and protected by EU policies.

Legacy carriers "are screaming about the Gulf Three," Baker told an aviation forum in Dubai referring to his airline, Dubai's Emirates and Abu Dhabi's Etihad.

"There is enough business... They are inefficient," he charged.

Baker said workers' unions were the cause of problems faced by legacy carriers, not Gulf carriers which have seized a sizable share of transit travel between the West and Asia and Australasia.

"It is the unions that should be blamed," he said.

Baker charged that the European Union intervened far more than the United States when it came to the protection of home carriers.

"EU without doubt," he said, naming France and Germany in particular.

"We have problems in France, Germany, the Netherlands and elsewhere... Stirred by two individual countries: Germany and France," he said.

European airlines, notably Air France and KLM, have voiced concern at increased activity by Gulf-based companies, complaining of differences in taxation that they say cause unfair competition.