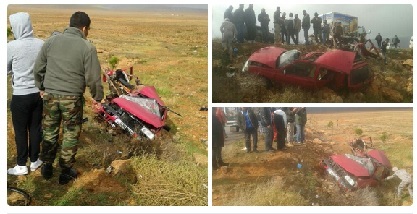 A soldier was killed and three others were injured on Saturday after their car flipped over in the Bekaa town of Hermel due to bad weather.

“Two of them were admitted to Hermel public hospital,” NNA said.

The soldiers were in a red Volkswagen Golf.

“Misha”, the first major storm of the season, has made landfall on Lebanon on Friday, with downpours and heavy winds raging throughout the country.

Misha will reach its climax on Saturday, bringing snow to areas as low as 1,700 meters above sea level.

The storm, coming from Greece, will continue until Thursday.

Later on Saturday, NNA explained that the four soldiers are from the North and “they were on their way there through the Hermel road when speeding and the heavy rain led to the flipping of their car and it broke into two parts.”