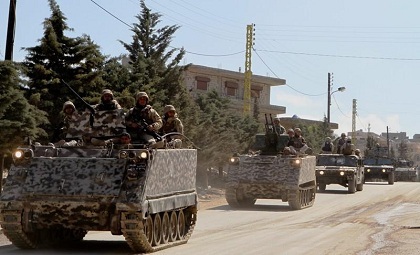 A French military delegation and officials at the Lebanese defense ministry reached a final agreement on the arms and ammunition that the army needs under the $3 billion Saudi grant announced last year, An Nahar daily reported on Thursday.

The newspaper said that the discussions between the Lebanese officials and the delegation, which includes military experts and representatives from French companies, settled the Lebanese army's request for aid to its ground, navy and air brigades.

The arms and ammunition will be delivered in three stages, the first of which will be immediate, said the report.

The second stage will involve the delivery of new weapons stored in French warehouses while the third will take a little time to be implemented because it includes arms and ammunition that are still under production, it added.

France and Saudi Arabia signed an agreement at the start of November for Paris to provide the Lebanese military with the $3 billion worth of weapons paid for by Riyadh.

The deal, which was first announced last December, aims to boost the army as it struggles to contain a rising tide of violence linked to the civil war in Syria.

I will believe it when I see it

It's happening ya Marc. Smile, we have a real good army and it's getting better and better.

The Army is THE only solution, the stronger it gets, the less space for militias. Any sane Lebanese citizen, after having lived for decades in a state that was hijacked by the PLO and the many militias that followed thereafter, any citizen will understand that if we Lebanese want to have a proper state, it will all begin with a strong powerful army. Once the army can impose its authority over all the land, then it will root out the rotten and dirty politicians and replace them with a younger and a lot cleaner and more dynamic generation. It is all consequential, so let's have our strong army, and let's have a REAL country. So long militias, your days are now being counted.