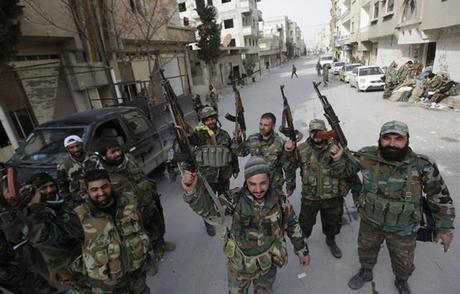 Syrian troops have killed 50 "terrorists" in an ambush in the largely rebel-controlled countryside east of Damascus, according to state media.

"An army unit killed 50 terrorists in an ambush while they tried to flee Mediya village," SANA news agency reported late Wednesday, using the standard official term for the rebels.

The Syrian Observatory for Human Rights said 30 people, all of them men ,had been killed in the operation, backed by fighters of Lebanon's Hizbullah.

But it said it could not confirm whether all of the dead were rebels.

A Hizbullah source confirmed that the group's fighters had taken part in the operation and said 30 rebels had been killed.

The Shiite group has deployed thousands of fighters to Syria to support President Bashar Assad's regime against the mainly Sunni rebels.

Countryside east of Damascus known as Eastern Ghouta has remained largely in rebel hands, despite repeated efforts by the army to oust them.

In August 2013, the area was hit by a string of chemical weapons attacks that killed hundreds of people.

The attacks sparked U.S. threats of military action that were defused only by the government's agreement to dismantle its chemical arsenal.

the regime is continuously falling, in the sense that their boots are repeatedly falling on the necks of these saudi/qatari/turkish rats :)

Please as per your usual requests, supply the proof that Ja3Ja3 claimed 3 years ago that the "regime" would collapse in question of "a couple of months", many thanks.

seems southern is happy that the regime that killed tortured,kidnapped lebanese destroyed Lebanese villages, set up a corruption Policy, stole lebanon's wealth is still in place, like a brave little traitor he is....

Thank you for your input but I don't see a timeline in the article you provide. Moreover a couple is two and your love of accuracy in language in world famous, even if we accept the Qaddafi timeline, his collapse took more than two month. Please as per your usual requests, we are still short of the proof that Ja3Ja3 claimed 3 years ago that the "regime" would collapse in question of "a couple of months", many thanks.

PS: The fact that you hear him say that inside your own head, does not constitute a proof. The noise inside your head cannot be heard by anyone else.

oh! and how do you know? because i am against hezbollah? LOL

"syria won't fall Under terrorist control" ? LOL syria is ALREADY a terrorist country... aoun said tht many years ago... but i guess it is not true anymore as the syrian regime is not under assad anymore mouuuu hek?
you are pityful southern... good boy to support a regime that KILLED THOUSANDS OF LEBANESE.... seems that is does not bother you a bit...

brave little traitor honouring the memory of thousands of lebanese killed by a regime you are proud to support....

i am just exposing your stupidity but it seems it enrages you... poor thingie, get a life ....

oh! and your friend aoun kept claiming that the syrian regime was a terrorist one, seems you have memory problems poor thing....

but don't worry we know how pissed of you M8ers become when we remind you of your double standards... and memory problems..

tell us: isn't it true that aoun kept saying that the syrian regime was a terrorist one? i can bring you many interviews and speeches he delivered saying that!

yeah right peace. I have no life, how come you are so eager to have a debate with me then?
What kinda life is that now? I am laughing.

General Aoun changed his views, when he saw much worse threats than the Syrian Government, which is called Israel-takfirism. The M14 though, seems to be ignoring that fact.

israel takfirism! waw! that is nice knowing that israel prefer assad to remain in power! LOL

but we know this truth is hard for you....

sure and that is why not a single shooting occured to liberate the golan heights for 40 years. assad did all he could to liberate it mouuu hek? idiot.

Soon we will see the M14 goons whine about them being "civilians".

and your idiot of caporal who was saying "next Tuesday"!!!

A great victory to the Syrian people.

victory to the syrian terrorist regime not people... assad chose to bomb its people with you proud support ....cut your hypocrisy miss tic

You seem to get very upset, peace...relatives of yours?

Actually it is quite the opposite. The U.S accuse Syria of killing civilians, when they themselves has killed billions of civilians in centuries.

Can anyone explain why peace is so upset of this news?

lol does it need an explanation?

but you miss tic keep saying that the US are killing civilians in syria and it enrages you ... but when assad does the same you applaud... see your twisted sick mind and double standards!?

as i said for you some civilians are halal others aren't....depending on who bombs them. you are just a twisted psychopath....

Mystic - 'The US ... has killed billions of civilians in centuries' ... Are you an idiot?

Peace is upset because of your stupid remarks.

The Butcher has assassinated much more people than the ISRAELIS did...

and killing lebanese and having humiliated them for décades and tortured them makes him a resistant in the eyes of M8ers and they say we are the traitors! LOL

No one is calling you a traitor, but your own conscience.

I care less if its Syria, Iraq, Kurds or anyone else who rid the world of these hear eaters...Many in the known world also cheer of this news.

So why are you so upset & must make excuses as to why your so upset at such news?

Picture says it all, bearded terrorists from Lebanon killing ambushing Rebels and anti regime forces? It is very true that you cannot teach stupid.
When the bombs explode in Beirut in retaliation of the bearded terrorists playing Assad role in Syria then we began blaming M14, Saudi arabia and anyone on earth that supports the ruthless killing regime of syria.

Allah Yerhamoun. The people of Syria will one day get rid of this regime and ISIL. It is unfortunate that we have Lebanese citizens who are willing to support a regime that has brutalized its population for decades. A good day will be when Syria has a democratic and representative government and not a choice between the monsters of Assad and Baghdadi.

share your infos about who got killed as you seem to perfectly know it... true your assad never killed any innocent civilians, they were all terrorists mouuu hek? idiot.

the sad thing is dat the situation is gonna last for years n lebanon is facing a big problem , the refugee n financial crisis most businesses are closing down n it will get worse!! lebanon must push the UN make a no man's land in syria n put the refugee in, close the borders, start gas extraction before the coming starvation