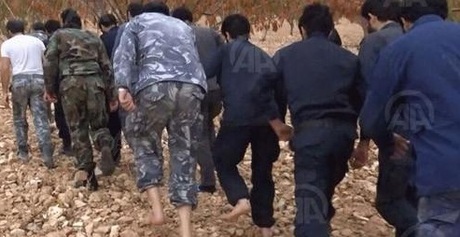 The Lebanese state is reportedly waiting for the final names of the prisoners that the Islamic State group and al-Qaida-linked Nusra Front are demanding their release to exchange them with the captive soldiers and policemen.

According to al-Mustaqbal newspaper published on Sunday, the Lebanese state gave the green light to the prisoners swap deal, demanding the abductors to hand over to the Qatari-appointed negotiator Ahmed al-Khatib, the list of inmates they want their release.

The newspaper said al-Khatib will arrive in Lebanon during the upcoming two days to activate the channels of communication with the jihadists, who overran the northeastern border town of Arsal in August and took the soldiers and policemen hostages as they withdrew from the town.

The militants are entrenched on the outskirts of Arsal on the porous Syrian-Lebanese border.

The newspaper said that the Lebanese state is seeking to diversify the negotiation channels – direct and indirect - with the abductors to ensure the safe release of the abductees, ministerial sources told the newspaper.

The sources, however, said that the direct negotiations with the jihadists will be through local channels that are capable of swiftly reaching them, noting that the mediation of al-Khatib is ongoing.

“We are seeking to fortify the chances of swiftly releasing the soldiers and policemen.”

The IS group reportedly announced its readiness to release the Lebanese soldiers and policemen in its captivity, if the Lebanese state sets free five Islamist inmates in return for each captive.

However, the Nusra has said that the three-month hostage crisis would end if 10 inmates held at Lebanese prisons would be freed for each hostage or seven Lebanese inmates and 30 female prisoners held in Syria would be released for each abducted soldier and policeman or if five Lebanese and 50 women inmates would be freed.

Get on with it and stop procrastinating and playing with people's lives. We have no option but to do a swap... the sooner the better.

So all this delay because of the hezbshaitan?
The only thing they wanted was there own. Like always, lebanon and the people in it are a bad nr 2