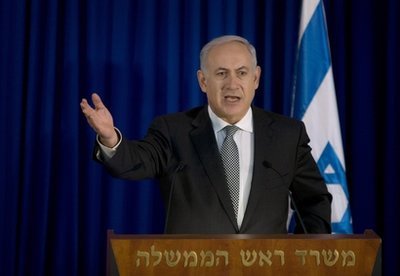 Israeli Prime Minister Benjamin Netanyahu on Tuesday called for early elections as he fired two key ministers in his coalition government over a policy dispute.

"I will not tolerate opposition in my government any more," Netanyahu said of the sacking of Finance Minister Yair Lapid and Justice Minister Tzipi Livni.

"I won't accept ministers attacking the policy and head of the government from within," he said in a statement.

Netanyahu said he would call for parliament to be dissolved "as soon as possible to go to the people and get a clear mandate to lead Israel."

Parliament was due to hold a preliminary vote to dissolve the country's parliament, the Knesset, on Wednesday.

Sources in Netanyahu's Likud party told Agence France-Presse the coalition was likely to support the proposal, under which elections could be held as early as March 2015.

Cracks in Netanyahu's right-leaning coalition emerged over the 2015 budget and a contentious bill aimed at enshrining Israel's status as the Jewish state in law, a move critics say could harm its Arab minority.

Coalition tensions brewing for months came to a head Monday after talks between Netanyahu and Lapid aimed at heading off a crisis collapsed.

The coalition was formed after a January 2013 general election, and the next poll had theoretically been due in November 2017.