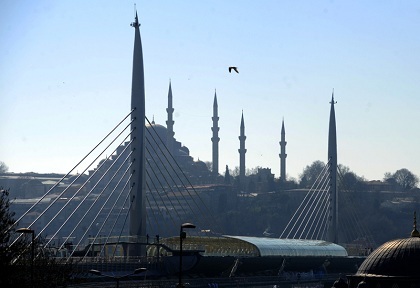 Turkish students know Albert Einstein but can't name any Muslim scientists or scholars, President Recep Tayyip Erdogan complained on Tuesday as he called for a new curriculum in schools.

"If you ask them who Einstein is, every young person has something to say about him. If you ask who Ibn Sina is, you see the child has never heard about him," Erdogan told a teachers' forum in the southern city of Antalya.

Ibn Sina, more commonly known in as Avicenna, was an 11th century Islamic philosopher, doctor and scientist. The Persian polymath is considered one of the most remarkable thinkers of the Islamic Golden Age, during the Middle Ages, when Islamic caliphates propounded scientific advances.

Erdogan, a pious Muslim who took over Turkey's presidency in August after serving as prime minister for more a decade, has sought to reinforce the image of Islam in his nation. His increasingly strident campaign has detractors fearing he aims to overturn Turkey's longstanding secular principles.

Although the claim was mocked at home and abroad, the president hit back by saying that the Muslim "discovery" should be taught in Turkish schools and that his domestic critics were guilty of an "ego complex" for denying his assertion.

On Tuesday, Erdogan said Turkish students should know about Turkish musicians as much as they do know about foreign composers.

"Our students should also learn about, know and listen to Itri and Dede Efendi, the same as they know about Beethoven," he said, making references to Ottoman-era classical composers alongside the German composer.

"Our students should know about their own language and the words, works and art of their ancestors without any complex, as much as they learn other cultures and languages," he added.

"We should not forget that whoever imitates or goes after (others) will stand one step behind."

A "muslim thinker"? I had no idea any had ever existed...

It seems Erdogan is not only corrupted by power but made insane by power,
he comes out with ever more bizarre claims every week

It is a legitimate comment that in Turkey they ignored the substantial contribution to science that Muslim and other Eastern scientists made.

So what? Most Turks also know that Erdogan's palace cost over $600 million; but not that the Ottomans massacred over 1.5 million Armenians from 1915 through 1923. So by all means, do please educate your students about the deeds of their ancestors.

Ibn Sina was most definitely a Muslim.

Music is 'haram', forbidden in Islam.

Turks need education, but not of the Mohammedan variety.

I guess Warren gets his Islam from IS.

And Tell how your comment does not apply on almost every country in Europe who was never Christian and where Christianity was imposed on much of the population by force.

Erdagon should also reintroduce the arabic alphabet instead of latin letters!

How many Muslim recipients of a Nobel? Jews?

Perhaps there is a reason.

Noooooo! Einstein was a muslim! Columbus was a Muslim! Aryabhatta was a Muslim! Even Gandhi was a Muslim. Earth is flat! World wars were started by jews. And oh what else? Yes, ISIS in NOT Islamic and not all muslims are terrorists! Hey I just mentioned the greatest thinkers that existed in Islam's history, or did they?