Change and Reform Vows to Put End to 'Coup against Constitution' 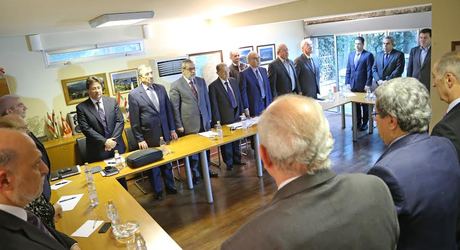 The Change and Reform parliamentary bloc announced Tuesday that it will “exhaust all available means” to put an end to what it described as a “coup against the Constitution,” after the parliament voted to extend its own term to 2015.

“Obstruction and consensus are two sides of the same coin,” the bloc said in a statement issued after its weekly meeting in Rabieh, slamming alleged “usurpation and monopolization of power by this (parliamentary) majority.”

The bloc pledged to “exhaust all available means – in the Taef Accord, the Constitution and politics – to put an end to this coup against the Constitution, which is being accompanied by power abuse.”

The parliament had on November 5 extended its mandate by another two years and seven months, with 95 MPs voting in favor of the move and amid a boycott by Change and Reform and the Kataeb bloc.

Change and Reform had submitted an appeal against extension to the Constitutional Council. The appeal however was dismissed under the excuse of “avoiding further vacuum in state institutions.”

“This is not the first time that this Constitutional Council has disappointed the people and usurped their will,” the bloc said.

Separately, it reiterated its call for holding a parliamentary session dedicated to “interpreting Article 24 of the Constitution,” which is related to equal power-sharing between Christians and Muslims.

It described such a session as “the correct gateway to approving an electoral law that would be compatible with the stipulations of the Constitution.”

The bloc also warned that “any demand to hold the presidential vote before passing an electoral law and holding parliamentary polls would be aimed at preventing both junctures from taking place.

C&R gabbing about ending "coup against constitution" is like Israel yacking about the need to liberate Palestine: A good idea over all, but look who's talking!

They can be as vocal as they want but at the end of the day, they remain a part of the unconstitutional parliament. Not voting for the extension is not good enough.

"Exhausting all available means" starts by resigning from parliament because it is illegal, not remaining in it "just in case".

No one will take them seriously as long as they are part of the same entity they're complaining about.