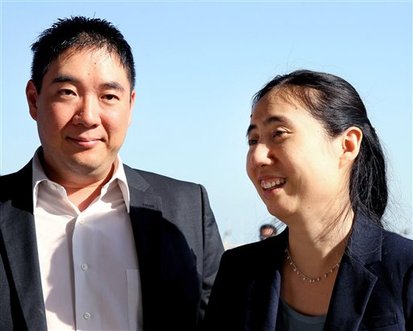 Qatar will allow an American couple to fly home Wednesday, three days after being cleared of wrongdoing in the death of their adopted daughter, top U.S. diplomat John Kerry said.

An appeals court in Doha acquitted Matthew and Grace Huang on Sunday of any parental neglect following the death of eight-year-old Gloria, who had been adopted from an orphanage in Ghana, and said they were free to leave.

But at the airport, the Huangs were prevented from leaving Doha.

In a statement late Tuesday, U.S. Secretary of State John Kerry said the U.S. embassy in Qatar had now been told that "no further appeal will be filed."

"At the opening of business on Wednesday December 3, the travel ban will be lifted and Mr and Mrs Huang will be free to travel," Kerry added.

"The United States applauds this decision, and we look forward to seeing the Huangs reunited with their children at home."

State Department spokeswoman Jen Psaki told reporters in Washington on Monday that U.S. officials were working with Qatari counterparts to resolve the case.

The Huangs, who are of Asian descent, were arrested in January 2013.

They were initially accused of starving Gloria to death to sell her organs, but later jailed for three years for parental neglect.

They insist that Gloria died of an eating disorder rooted in a troubled early childhood.

They were released in November 2013 pending an appeal, but the court at the time denied their request to leave Qatar to join their other two adopted children in the United States.

Adoption and multiracial families are rare in Qatar, a conservative Arab emirate, and the family's supporters maintain Qatari authorities misunderstood the Huangs' situation.

The public prosecutor had originally pushed for the death penalty for the couple.

The Huangs moved to Qatar in 2012 for Matthew, an engineer, to work on infrastructure projects linked to the 2022 football World Cup.