U.S. Says Palestinian State Will Only Come through Talks 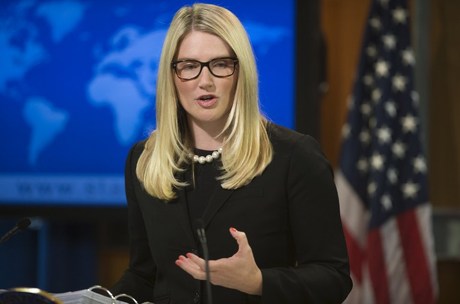 Washington Tuesday reaffirmed its "crystal clear" stand that Palestinians will only realize their dream of statehood through direct talks with Israel, just hours after a controversial vote by French lawmakers.

"The U.S. position is clear, that we support Palestinian statehood but believe it can only be achieved through direct negotiations between the parties that resolve the final status issues," said deputy State Department spokeswoman Marie Harf.

French lawmakers voted Tuesday in favor of recognizing Palestine as a state, sparking an immediate angry reaction from Israel which said such "unilateral measures" would harm efforts towards Middle East peace.

The vote -- which is non-binding on the government but highly symbolic -- comes as European countries seek alternative ways to restart the stalled Middle East process.

It follows hot on the heels of a move by Sweden officially recognizing a state of Palestine.

Harf stressed that Tuesday's vote by the lower house of the French National Assembly was non-binding and French government's position remained unchanged.

But she conceded: "I think what you’re seeing are people around the world speaking out and saying the status quo is unacceptable."

"We’ve said that. Everyone has -- a lot of people have said that. But we very firmly believe that the way to achieve two states is through direct negotiations," she insisted.

Secretary of State John Kerry this year led an intensive U.S. push for Middle East peace, but his effort ultimately collapsed, undermined by steps taken both the Israeli and Palestinian leaderships.

Hmmm. A little note to Ms. Harf: You expect the Palestinian people to sit down and negotiate with Israel? Ok. But where are the Palestinian people who you are expecting to sit down and negotiate supposed to live in the meanwhile, considering that they are being driven out of their homes by expanding colonization of their land by the Israeli government who they are supposed to be negotiating with?
The U.S. insists that Iran completely dismantle their nuclear project and call the Iranians "intransigent" and "unrealistic" if they insist on maintaining even as little as 20% of their nuclear development facilities; yet you want the Palestinians to get down on their knees and suck Israel off despite the fact that the Israeli government has already left the Palestinians with less than 20% of their land?
The Palestinians will negotiate with Humans, not with hypocrites.