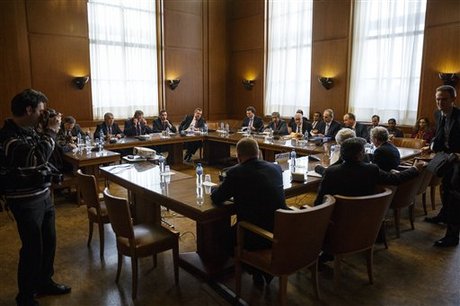 The Syrian regime and several key opponents have agreed to move towards new peace talks mediated by Russia, sources on both sides told Agence France-Presse.

"The Russians want to take the initiative for a real search for political solution through dialogue. They got the agreement from the Syrian government," she said by phone from Damascus.

Alongside Iran, Russia is the Assad regime's main backer in a civil war pitting loyalists against Western and Arab-backed rebels.

Speaking to AFP on condition of anonymity, a source who accompanied the government delegation last week said: "There is no schedule yet. The Russians only wanted to know if the idea seems acceptable to us. We said we have no problem."

The source added: "The Russians are trying... They have contact with several people. They told us that if we accept the idea they would like to start steps to prepare for dialogue in Moscow. We said that we don't mind, that we have no problem."

Early in 2014, government and opposition delegations met in Geneva for two rounds of failed talks sponsored by Russia and the United States.

The main obstacles to progress then were whether Assad would remain in power, the war against "terrorism" and a possible transitional government.

But now things have changed. Assad is still in power after a June election denounced by the West as a "parody of democracy."

Meanwhile the war against "terrorism" has become a priority for both sides because of the rise of the Islamic State (IS) group, despite the regime labeling both rebels and jihadists "terrorists."

The main Syrian National Coalition, which represented the opposition in Geneva, opposes a possible resumption of talks, but has lost sway on the ground.

Former coalition chief Khatib, who resigned from it in 2013 but remains an influential opposition figure, traveled to Moscow along with other military and political dissidents in early November.

"It is in the Syrian people's interest for us to sit down together once and for all, and to find a way to save the people from this pain and suffering," Khatib told AFP.

Speaking by phone from Qatar, he added: "We want to solve the problem, because the problem now affects each and every Syrian. The regime is suffering, the opposition is suffering and the people are suffering."

He also said a deal could see Assad remain in power for a limited time.

"Of course (Assad) has to leave," Khatib said. "But the idea that his mandate would finish on a given date, this idea could make sense."

Other opposition figures are also expected to take part in any talks, among them Paris-based dissident Haytham Mannaa and Moscow-based Qadri Jamil, a former member of the tolerated opposition.

Kamil told AFP he too was invited to speak to the authorities in Moscow.

"But I cannot confirm that any meeting is being scheduled for December," he said, adding that there are several "nuances that need to be figured out."

Waddah Abed Rabbo, chief editor of pro-regime newspaper al-Watan, told AFP: "The Moscow meeting marks a turning point because it is clear that Russia wants to make progress. Much of the Syria file is in Moscow's hands, and it has a lot of weight on the international scale."

The possible resumption of talks comes as the opposition faces its most difficult challenges yet since the outbreak of the 2011 revolt.

Asked whether a U.S. role has been discussed, the source that accompanied the government delegation said: "We haven't asked the question to our Russian contacts, but I don't think any (talks) would kick off without the knowledge of the Americans. They want to try to get everyone on board."