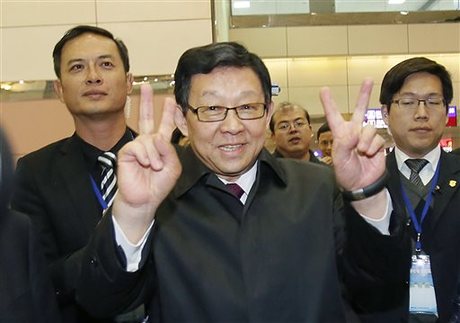 A visiting Chinese envoy was quoted Wednesday as saying relations with Taiwan will not be damaged by the landslide defeat of the island's Beijing-friendly Kuomintang ruling party in local elections.

The eight-day trip by Chen Deming, president of China's quasi-official Association for Relations Across the Taiwan Straits, comes amid growing fears about China's increasing influence in Taiwan.

"Chen said cross-strait relations won't be influenced by the outcome of the polls," a participant at a breakfast gathering with Chen told Taiwan's state Central News Agency.

Analysts said Chen's visit had symbolic significance after the Kuomintang was crushed in the local elections last month, in what was seen as a setback for the government's China-friendly policy.

Chen smiled and ignored a rowdy protest by about 20 members of the radical pro-independence group Taiwan Solidarity Union as he arrived at Taipei's main station on the second day of his tour of the island.

He travelled on to the eastern county of Hualien.

The demonstrators, who had also protested at the airport Tuesday, carried signs reading "Chinese communist crawl back to China" and "Taiwan's future decided by Taiwan people".

No-one was hurt or arrested during a brief shoving match with police.

When asked by reporters about a controversial China-Taiwan services trade pact pending approval in the island's parliament, Chen said only: "I hope the wishes of both sides can eventually be realised."

"So the visit is a signal that Beijing hopes to see the ties with Taipei continue, not to be interrupted by the election results," he said.

"But of course, it would be premature to say if Beijing could change its current policy towards Taiwan after Taipei elects a new government in 2016."

Tense relations with China have warmed since Kuomintang President Ma Ying-jeou was elected in 2008 on a platform of improving cross-strait ties and reviving the slowing economy.

But public sentiment has turned against the Beijing-friendly approach, as voters say trade deals have been agreed in secret and not benefited ordinary Taiwanese.

The services trade pact sparked a takeover of parliament and a mass protest earlier this year.

Taiwan and China split in 1949 at the end of a civil war. However Beijing still claims the island as part of its territory awaiting reunification -- by force if necessary.

I loved his hit Gangnam Style!