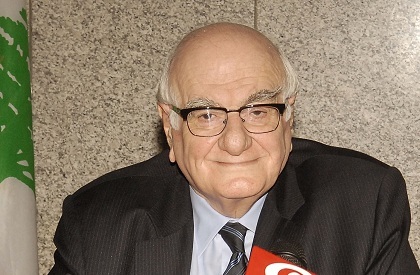 Information Minister Ramzi Jreij noted on Thursday that the media is offering the kidnappers of the Arsal captives too much airtime, “which is allowing them to blackmail the state and the victims' families.”

He said during a press conference: “The terrorists are exploiting the media to terrorize the people and they should therefore be kept away from the spotlight.”

“The media is obligated to confront the media war being waged by the takfiris against Lebanon,” he added.

“Some media institutions have transformed into outlets for the kidnappers,” he lamented.

Jreij therefore stressed that “we are in need of unifying our ranks and rejecting disputes.”

He noted that several violations of sound media practices have been committed, stating: “Media freedom should be practiced under the rule of law.”

“I have requested that the media halt sectarian incitement in their reporting of the kidnapping,” Jreij revealed.

“I will not hesitate to take legal measures against any violations,” he warned.

“I call on the media to adhere to national and professional standards in reporting the news related to the captives,” remarked the information minister.

In August, number of policemen and soldiers were kidnapped from the northeastern border town of Arsal by Islamists from Syria.

Four of them have since been executed, a few were released, while the rest remain held by the extremists from the Islamic State and al-Qaida-affiliated al-Nusra Front.

The families of the captives have repeatedly accused the state of not exerting enough efforts to release them.

Media speculation over the fate of the captives and the negotiations over their release have sparked confusion in the case, increasing the frustration of the families.

Servicemen: whom do they serve? What purpose?