French Parliament to Form Committee to Follow up on Lebanon's Security, Refugee Needs 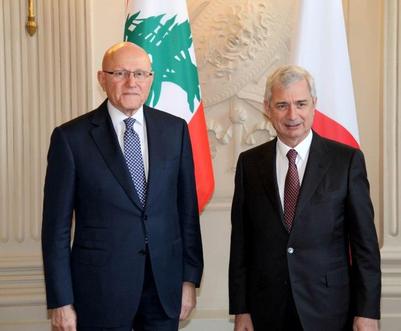 France informed on Thursday Prime Minister Tammam Salam that it will form a parliamentary committee aimed at following up on Lebanon's needs.

Salam revealed: “Speaker Claude Bartolone informed me that a high-ranking parliamentary committee will be formed to follow up on Lebanon's military and Syrian refugee needs.”

He made his remarks during his ongoing visit to France that he kicked off on Wednesday.

The premier had declared at the start of his visit that the government is in “great need” of international aid to help it in supporting the burden of nearly 1.5 million Syrian refugees.

Salam continued his trip to Paris on Thursday by visiting the Arab World Institute.

On Friday, the prime minister is scheduled to meet with French President Francois Hollande and PM Manuel Valls.

On the left stands one of Lebanon's very best PMs. Today on his own, he is holding a fort as best as he could, may God strengthen your hand Mr. Salam, a people are grateful for your efforts.

Lebanon is at a stage where action is needed , so La France just take your commission on the arm grant from KSA and send what the army wants as arms ASAP and then form your committee