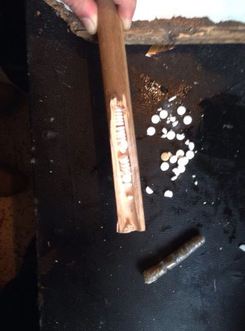 Security forces at the al-Qobbeh prison in the northern city of Tripoli discovered on Thursday drugs hidden inside the handle of mop which was being smuggled into the facility.

The assortment of drugs were hidden inside the hollowed up wooden handle of the mop.

They included 30 Benzhexol and Captagon pills and six grams of cannabis.

The mop was being sent to an inmate identified by his initials of M.M., said a security forces statement.

This is the latest unusual attempt by smugglers to breach prison security.

Past attempts at al-Qobbeh included hiding the banned substances in pistachio shells, potatoes, shoes, and a jacket.

Earlier in the year, security guards at the Zahle prison foiled separate attempts to smuggle drugs in a toothpaste tube, meat pastries, meat sandwiches and apricots.