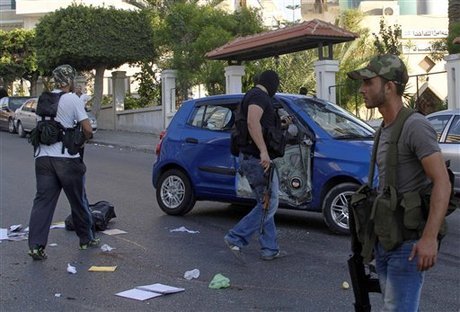 The Sidon area of Taamir Ain el-Hilweh witnessed Thursday an exchange of gunfire between a member of the Hizbullah-affiliated Resistance Brigades and agents from the Intelligence Bureau of the Internal Security Forces, which soon erupted into armed clashes and prompted the bureau to dispatch a unit from its commando Strike Force to the southern city.

“As a unit from the Intelligence Bureau raided the shop of Abbas D., his son Mohammed, who is a member of the Resistance Brigades, opened fire at them,” state-run National News Agency reported.

“The agents responded in kind and the army immediately carried out a broad deployment in the area in order to contain the clash and pursue the shooter,” NNA added.

After a brief lull, gunfire renewed in the neighborhood in the evening as the sound of a blast echoed in the area.

Al-Jadeed TV said the explosion might have resulted from a hand grenade as MTV said the sound came from “an RPG fired into the air by the Resistance Brigades during the raids that were carried out by the ISF Intelligence Bureau.”

According to NNA, bureau agents managed to arrest Resistance Brigades member Mahmoud Adnan Ahmed, “who was one of those involved in the shooting.”

Meanwhile, the Joint Palestinian Force at the Ain el-Hilweh Palestinian refugee camp “took strict security measures to prevent the entry of any fugitive fleeing the security forces,” the agency reported.

The decision to create the Resistance Brigades was taken in 1997 by Hizbullah's leadership. The group at the time comprised Lebanese young men who wanted to fight the Israeli occupation of southern Lebanon without having to officially join Hizbullah.

However, the Brigades were not dissolved after the Israeli army withdrew from southern Lebanon in 2000 and they reportedly took part in the fighting against Islamist cleric Ahmed al-Asir's group in the Sidon suburb of Abra in 2013.

On December 3, Interior Minister Nouhad al-Mashnouq announced that the security plan that got underway months ago will also be implemented against the members of the Hizbullah-linked group, which he described as a group of “sedition, divisions and conflict.”

terrorists firing at our armed forces? they should be jailed and treated as the extremists terrorists they are.

Hezb is spawning militias that are taking us to the edge of hell. There should only be one army. Institute the national military service, form a national reserve and disarm the Hezb and all other militias.

What are they resisting.... they resist the state, they resist the law, they resist freedom and civilization. You can bet nobody will be arrested just like the hundreds of previous incidents in the past. They are the privileged sect of Lebanon; they have weapons and they claim they are here to defend Lebanon and if it were not for them ISIS would have been in Jounieh by now. Sickening indeed....

May they and their leader perish in the deepest pits of hell.

Ex-FPM said it best. They are resisting the country and the state institutions. Daesh would be in Jounieh if not for Hezbollah? Haha I'm sure. The Christians of the jabal (the real resistance) would be left to fight Daesh by themselves. Hezbollah has proved time and time again that it is above the law and is doing nothing except intimidating the rest of the Lebanese with their weapons. If the dysfunction continues, there will be another civil war.

sectarian thugs and terrorists. Their sole purpose is to undermine the building of the State and hinder progress. As long as this HA exists, Lebanon has no hope in being a civilized nation.

I quote, "However, the Brigades were not dissolved after the Israeli army withdrew from southern Lebanon in 2000 and they reportedly took part in the fighting against Islamist cleric Ahmed al-Asir's group in the Sidon suburb of Abra in 2013.". This is part of this article, unquote. Israel is indeed out, the army is in Saida, now what are these people still doing in Saida? But winds of change are beginning to blow against such illegal entities, the majority of the people of Lebanon are perfectly happy with the army's work against the Sunni Jihadists and radicals, call the takfiris or whatever, but also, unanimity is obvious that almost everyone wants the army toe extend its work to cover areas held by the ex-resistance. There should be no armed presence except for Lebanon's constitutional armed forces, anything else is a gross contravention of the laws of Lebanon and its very constitution.

What a bunch of thugs. They should be caught and prosecuted accordingly.