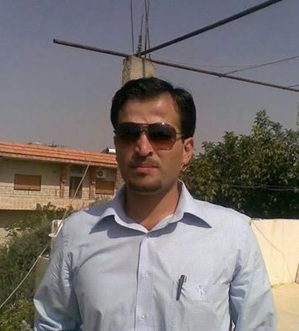 An Al-Jazeera Arabic correspondent in Syria has been killed covering fighting in his hometown in the south of the war-torn country, the Qatar-based news channel announced on Thursday.

Mahran al-Deeri "died Wednesday while taking cover from government fire as his car hit the vehicle of rebel fighters after he turned off his headlights to avoid being targeted," Al-Jazeera Media Network cited his family as saying.

The incident took place in Sheikh Meskin, in Daraa province.

Acting Al-Jazeera director general Mostefa Souag said "our martyred colleague Mahran al-Deeri has worked with aljazeera.net for over a year and was known for his courage, bravery and professional coverage of the Syrian revolution in the area of Daraa and its suburbs."

"Targeting journalists will not deter us from reporting the truth which we have been committed to for over 18 years."

Deeri, 31, was the father of two. He had worked with the official Syrian news agency SANA before quit after the uprising broke out, first in Daraa.

In April, the New York-based Committee to Protect Journalists branded Syria as the world's most dangerous country for journalists as it published its annual impunity index tracking unsolved killings of reporters.

According to the CPJ, more than 70 other journalists had been killed covering the Syrian conflict since it broke out in 2011.

A criminal regime that targets anything that moves.

Good bless the regime, and my all the terrorists burn in hell.