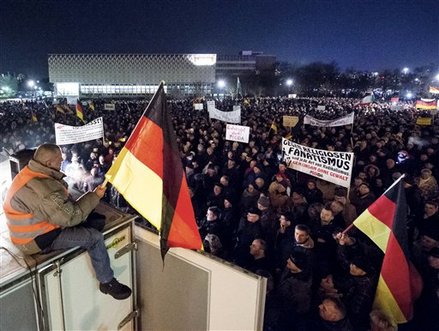 Thousands demonstrated Monday in eastern Germany against "criminal asylum seekers" and the "Islamization" of the country, in the latest show of strength of a growing far-right populist movement.

The mass demonstration in the eastern city of Dresden was the ninth so-called "Monday demonstration" organized by the group "Patriotic Europeans Against the Islamization of the Occident" or PEGIDA.

"We are the people," chanted the demonstrators, co-opting the phrase famously shouted a quarter-century ago by East German pro-democracy protesters in the lead-up to the fall of the Berlin Wall.

Dominated by ordinary citizens but supported by neo-Nazis and hard-right football hooligans, PEGIDA has sparked nationwide soul-searching as it has grown and spawned half a dozen clone movements across Germany.

Chancellor Angela Merkel earlier Monday condemned the protests and warned Germans not to be "exploited" by extremists, saying the right to demonstrate did not extend to "rabble-rousing and defamation" against foreigners.

In the crowd, many waved the black-red-gold national flag, and one held a cross painted in the same colors, while others held up signs that said "Wake up!", "We won't be cheated any more" and "We are mature citizens, not slaves."

"Seventy percent of people claiming political asylum here are economic refugees," one of the protesters, Michael Stuerzenberger, asserted to Agence France-Presse. "We don't want to stay silent about this anymore."

"We don't want a flood of asylum seekers, we don't want Islamization. We want to keep our country with our values. Is that so terrible? Does that make us Nazis? Is it a crime to be a patriot?"

Hundreds of riot police kept a close watch on the demonstration, and on counter-protests nearby marching under the banners "Dresden Nazi-free" and "Dresden for All", organized by civic, political and church groups.

While several known neo-Nazis have been spotted in the PEGIDA crowds, the rallies since October have been dominated not by jackbooted men with shaved heads but by disenchanted citizens who voice a string of grievances.

The anti-euro AfD party has openly sympathized with PEGIDA and several conservative politicians have argued the government must "listen" to the people's concerns about immigration and a large influx of refugees.

A poll for news website Zeit Online showed that nearly half of all Germans -- 49 percent -- sympathized with PEGIDA's stated concerns and 30 percent indicated they "fully" backed the protests' aims.

Almost three in four -- 73 percent -- said they worried that "radical Islam" was gaining ground and 59 percent said Germany accepted too many asylum seekers.