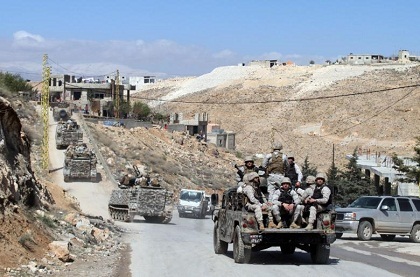 The front of the northeastern border town of Arsal and the various Syrian refugee encampments pose a danger to Lebanon, said a security source to As Safir newspaper on Tuesday.

It said that the encampments are a threat given the recent firing against a military helicopter, revealing that aerial footage confirm the existence of arms caches there.

Furthermore, it noted the spread of terrorist cells throughout Lebanon “which explain the army and security agencies' arrest of various terror suspects” over the past months.

Lebanon meanwhile inked on Monday the first phase of the Saudi-French grant to the Lebanese army, which is aimed at improving the military's capabilities to combat terrorists.

The development will allow the army and security agencies “to be more prepared and capable in confronting any terrorist adventure,” the security source told the daily.

“The army is not too far away from completely taking control of its confrontation with terrorists,” it added.

The source revealed that Lebanon urged the speeding up of the armament of the military “allowing it to take the initiative that will lead to the release of the servicemen kidnapped from Arsal.”

Commenting on the case, the source said: “The captive servicemen are a valuable card for the Islamists.”

“I do not think that they will let go of it even if all Roumieh Prison detainees are released,” it said.

Saudi Arabia and France inked in Riyadh in November a deal to provide the Lebanese army with $3 billion worth of French weapons, with Riyadh footing the bill.

The deal, first announced in December, comes as the Lebanese army is battling gunmen and jihadists, including from the Islamic State group, in the north and along its northeastern border with war-torn Syria.

He is scheduled to travel to the Saudi capital Riyadh to deliver a list of arms and equipment required by the military.

once more assafir!
hizbushaitan is pushing anyway possible to drag our armed forces to fight the Syrians to assist the Syrian regime.

yea, we all know there is no syrian rebels in arsal, and nusra3esh never attacked it and kidnapped soldiers. this is all hizzuzuzushaitan sorcery and mind manipulation tricks!!*

another attempt at humor? never leave your day job, if you ever had one

thanks ibn troll, i was hoping you wouldn't like it. would have really bothered me if you did.

geha is the perfect example, of a takfiri supporting M14'er. Mocking the army and smearing the LAF.

hahahah! My boss is laughing out so loud we thought he was having a fit. Thank you flamesrower for being YOU. Somesing Anazar!

who is the terrorist in your avatar?

hezbollah does not want the soldiers to be released...

Rifis ISF rangers, aint doing too well, they got themselves busted for sure. Not enough, he denied Al Nusra existence, he makes the ISF smuggle their wives.

I do not know why the army does not plant land mines all along the border with syria?