Report: U.S. Warns of Cooperation between Army, Hizbullah in Battle against Terror 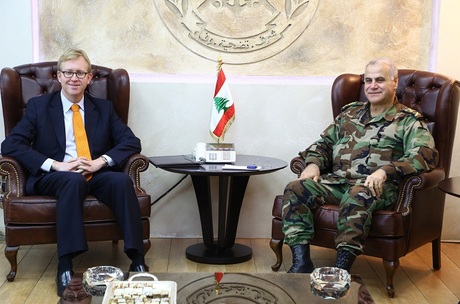 Washington has reportedly warned the Lebanese army against cooperating with Hizbullah in its war against terrorism and takfiris, hinting that any cooperation could impact the U.S. aid to the military.

According to a report published in al-Akhbar newspaper on Tuesday, U.S. Deputy Assistant Secretary of Defense for Middle East Policy Matthew Spence, who visited Beirut last week, warned in his meetings with Lebanese officials, in particular with Army Commander General Jean Qahwaji, of cooperating with Hizbullah as an partner in the war against terror.

A prominent source told the daily that the U.S. official stressed that Hizbullah is impeding the state project, which should be protected solely by the Lebanese army.

Spence also hinted that the army's success in battling jihadists, who overran the northeastern border town of Arsal in August, was due to the support that the U.S. granted.

Washington sought to bolster Lebanon's military by recently announcing it had delivered a new shipment of Hellfire missiles and would also supply light aircraft.

The prominent U.S. official reportedly described the performance of the Lebanese army as excellent and wise amid the sectarian tension in the country, noting that the war on terrorism created a new aspect that would allow the state to expand its authority on Lebanese territories at the expense of Hizbullah, indicating that the party cannot run the battle by itself.

The source quoted Spence as saying: The army has capabilities that Hizbullah lack, at forefront the U.S. support, which the Iranians and Russians cannot provide the party with.

The U.S. official also stressed that his country refuses to allow the war raging in Syria to move to Lebanon.

The report comes as the army and security forces had been carrying out in recent months raids in various regions throughout Lebanon in search for wanted fugitives and suspected terrorists.

Lebanese troops have been battling Syria-based Islamist militants, including the extremist Islamic State group and the al-Qaida-linked Nusra Front, in areas near the border.

They are already more than cooperating.... Hence, why the army is a target.

What makes a man a traitor according to your standards FT? Wanting independence and freedom? Wanting to have one army for one nation? Rejecting militia? Wanting clear boarders with our neighboring countries?...
For me the traitors are those who wage wars, have their own illegal communication systems, smuggle weapons, abduct, trade drugs, tax ports, threaten, assassinate, plot, etc, etc, etc...You are the traitor FT!

"Wanting independence and freedom?" lol that's what you call being a subservient statelet for israel and the US? running and yapping at uncle sam's commands?

Flame... I nominate no one... I do not wish for an "Ex" head of militia to be president... I do not want wealth buried under the sea, but I do not want Lebanon's wealth to end up in a Terrorist militia's pockets either.
Freedom is choice, freedom is the contrary of intimidation, of threatening, of abducting, and killing. Instead of always attacking the "great Satan" FT, open your eyes and start understanding what is going on in our own country...
@mom... retarded as ever eh! Israel rubbish... yeah ok... go play...

Freedom LOL, that is the response from people who do not know what they are writing. BELLOW, is a good example. THE PATRIOT, I agree 100% with what you said.

The army has already allowed itself to be subdued and enslaved by the Irani militia resulting in a very clear cut bias against the Sunnis of Lebanon.

the paid mouthpiece once upon a time said:
"flamethrower.._
officially? only in your empty head, texas. the LAF is openly supporting hezbollah in their battle in the eastern mountain range."

But again his credibility here is a non issue.!

Nice eagle! You owned him big time!
But I don't agree about the fact that Flame T is paid... and if he is... his boss is an idiot to be paying for such a lousy job...

the sole goal of hezbollah is to drag the lebanese army into the syrian conflict instead of letting it only defend Lebanon... hezbollah wants the lebanese army to cooperate with the syrian one to justify both assad's regime and hezbollah's involvement in syria despite the Baabda declaration... that is why they wish the soldiers never to be released to prompt the army into siding with them...

M8ers would be proud to work with assad as they never stopped licking his boots as the sole president of Lebanon....

may all your days RIP flamethrower

"since Israel is protecting nusra on the Golan border"
look how this piece of HYPOCRIT sh.. is talking... after decades of quietness on the golan front he dares say this... LOL

assad NEVER fired a single shot against israel.... assad is the protector of the golan...
idiot

I guess your first attempt at humor was not successful so you thought to try again?

no they just want us weak, unarmed, divided. anyone who forgets that the US is israel's ally, not our's, is a simpleton or a paid hasbara shill

Yes! Finally they admit it. Does USA care one bit about the LAF or Lebanese people? Only when it serves their interests that is, and when the LAF fights back against the U.S sponsored takfiris, then they get criticized by the Americans for doing so.

This is not a coincidence, our beloved Army doesn't need the U.S, it is time for a new Era, without any western influence.

Is that a terrorist Jihadi in your avatar?

What kind of aid, did the Americans give the LAF? M113 Apcs Old rusty tin cans from the 60's? Let Iran arm the LAF, stop waiting for the Americans and Saudi/French deals that never arrives.

the US aid is a total of almost 900 m usd.
it provides laf with basic operational capabilities. that include training and tactics, increased mobility and sooner ISR and close air and fire support.

the french deal will enhance those capabilities

iran cannot help laf due to the embargo on weapon export, poor military industry complex, and lack of technologies

Every week, we see Naharnet make articles about the French/Saudi arms deal being "finalized". That is all tons of nonsense, and we've heard that for months now.

Indeed, A terror party with legs allover aiming, through iranian blunt and aggressive funding and continuous support and training to overthrow governments, Lebanon, Iraq Yemen etc? Who knows, all means this arm of the Rev guards have no legetimate national goals. Their ideology is extremely clear and well known. WHAT is not understandable, is FPM and Aoun and his suns in law, how far and low they can go?

Psychologically Iran through hizEbola found 2 personslities that can give legitimacy to it's acts and plans that are underway, Aoun, the general looking for thst chair, no matter what are the consequences, they were able to Promise him the welth, and a chair, welth came the chair is hard because they are afraid from his Crazy ambitions.
The second Chsracter is Gebran Bassil, the shallow baby who plays with fire, burn himself and never lerns that what he is doing is harmful, never looks beyond, his plane, Castel and the posts he forced himself into and will never fit him, Ask Caroline.

The only solution is:
A military coup toppling all politicians and seizing the security over all Lebanon by only the Lebanese army with the help of UN (US or even DEVIL) to fight any resisting armed group including HA.
Enough with games of "ANATER" of any colour.