Bassil from Buenos Aires: Lebanon Rejects Terrorism, Not Linked to Any Terror Act 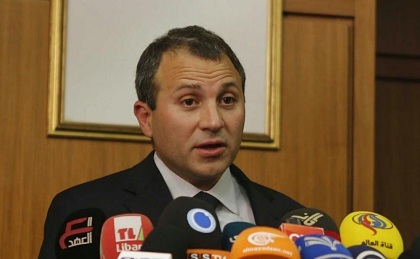 Foreign Minister Jebran Bassil stressed that Lebanon is not involved in any form of terrorism, refusing any links between any Lebanese or a group with any terror act that happened in the world.

The FM said during a joint press conference with his Argentinian counterpart Hector Timerman that Lebanon is seeking the truth regarding the 1994 AMIA (Asociación Mutual Israelita Argentina) bombing in Argentina, which was largely blamed on Hizbullah.

The attack, which was Argentina's deadliest bombing ever, killed 85 people and left hundreds injured.

“FM Timerman stressed that Lebanon's name, is not linked to the case... and we will always join efforts to combat terrorism,” Bassil added.

The FM stressed that the Lebanese consider Argentina as their second homeland, calling on further cooperation between the two countries.

Bassil also met with House Speaker Julian Dominguez who confirmed the integration between the Lebanese and Argentinians, citing the presence of Argentinian lawmakers from Lebanese origins.

He voiced hope that Lebanon would triumph in its battle against terrorism.

Chief of the Cabinet of Ministers Jorge Capitanich discussed with Bassil the possibility of facilitating visas from Lebanese nationals, setting up an air and land bridge between the two countries, fortifying trade and increasing investments and cultural exchange.

The FM also met with Health Minister Juan Luis Manzur, who is from Lebanese origins.

What are you? Hassan Nasralla's lawyer??

he sure is... minister of nasrallah not of the state of Lebanon! LOL

may you forever RIP flamethrower

Victim of terror?! laughable.... you are allied with a world renowned terror organization and signed a memorandum of understanding with them that details how both of you plan to destroy this country, steal its resources, and export terrorism to neighboring countries (Syria, Bahrain, Iraq, Yemen, Egypt, etc..)

make up your mind worm... a few time ago you d call him zionist... now isis lover...
the very fact that you change your mind proves how baseless and idiot you are....

Well spoken, by our Foreign Minister.

I used to visit naharnet not to read its one sided and biased articles but to read flamethrowers' comments. I still visit the forum to get a breath of fresh air and on point commentary by flamethrower.

Although allied to Hezbollah in Lebanon, Bassil is cautious with his words. He said that Lebanon has no links to terror and that is true.
All investigations point the finger to the Islamic Republic of Iran and potentially their assassination units (Imad Mughniyah who used to be a Palestinian Fatah member and later became a talented Hezbollah commander and cold blooded killer of civilians and politicians around the world and in Lebanon).

"Mughniyeh was formally charged by Argentina for his alleged involvement in the 17 March 1992 bombings of the Israeli embassy in Buenos Aires, which killed 29 and the AMIA cultural building in July 1994, killing 85 people.[27] In March 2007, the Interpol issued "red notices" for his and others' alleged roles in the attack."

Killing civilians and killing Lebanese politicians (Hariri and all) until Assad disposed of him as a token gesture to Saudi Arabia. Remember after Mughniyah's assassination in Damascus suddenly Saudi and Syria started speaking again and Hariri even went to meet Assad whom he had accused in past of killing his father.

I agree. Basil proved not only to be a dispicable human being when he disrespected Caroline, his assistant, in front of an Arab foreign minister but also an idiot for doing it in front of cameras.
If his wife had any self respect, she should have asked his father in law to chastise him and get him to resign.
But unfortunately the father in law lives on Planet Presidency and talks in an extraterrestial language.

Caroline Ziadeh is the UN Deputy Permanent Representative for Lebanon and not Basil's assistant, making matters even worse.

This made Mystic's point perfectly clear: that bombs are no longer terrorist acts, that only desecrating churches and shrines, beheadings and crucifixions, and forcing people to convert are the only types of terrorism...

If Lebanon rejected any form of terrorism, a group of terrorists would not be controlling Lebanon.

Buenos Aires, just another city in the world that was victim to Hezbollah's terrorist acts.

The FM stressed that the Lebanese consider Argentina as their second homeland, calling on further cooperation between the two countries.

How do you want cooperation, you want Argentina to buy the LAF weapons to fight terrorism???? Loooooool