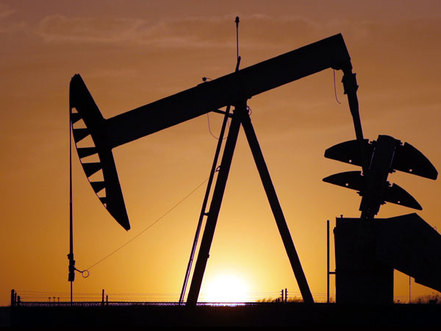 Oil suffered another dizzying plunge on Tuesday, with Brent crude sliding to a five-year low under $59 as markets were rocked by shrinking Chinese manufacturing output and turmoil in Russia.

At midday in London, benchmark contract Brent North Sea crude for January delivery slumped to $58.50 per barrel -- the lowest level since May 2009 -- and New York's West Texas Intermediate (WTI) for January hit a similar nadir at $53.80.

The oil market has plummeted by almost 50 percent since June, dented also by OPEC's recent decision to hold its output ceiling in an oversupplied market.

Sentiment was hit by the Russian central bank's shock move to raise interest rates to 17 percent, which has failed to arrest the slide of the ruble.

The Russian ruble crashed to new record lows Tuesday, losing some 20 percent in value by the afternoon despite drastic overnight measures by the central bank to hike the key rate.

The ruble hit 80 to the dollar and 100 to the euro on the Moscow Exchange.

"The combined effects of slumping oil, the Russian Central Bank’s interest rate hike and falling output from China have all come together to deliver a triple blow to the markets," said ETX Capital analyst Daniel Sugarman.

"Lower output from China means less of a need for oil, while as a primary oil producer Russia really feels the pain of lower oil prices, compounded by the sanctions imposed earlier this year."

However, Europe's main indices hit reverse gear again in early afternoon trade, in line with a renewed plunge in oil, which weigh on the profits and share prices of energy companies.

"Everywhere you look at the moment, there is bad global news, be it the ruble, Chinese manufacturing, or most significantly, Brent crude oil," Spreadex analyst Connor Campbell told Agence France Presse.

"If something doesn’t change, be it an OPEC/USA decision on oil, or a lifting of sanctions on Russia, the markets are going to be unable to build up a substantial bullish run to drag the global economic situation into calmer waters."

Asian stock markets mostly fell Tuesday following Monday's sell-off in Europe and the United States that was rooted in the sliding oil prices.

The ruble has now lost nearly 60 percent of its value since the start of the year amid the collapsing oil prices and Western sanctions over Russia's support for the separatist uprising in eastern Ukraine.

Half of Russia's revenues come from oil and gas, and the 50 percent slump in oil prices in the past six months has had a major impact on the country's economy.

The preliminary PMI for the month came in at 49.5, below the break-even point dividing expansion and contraction.

The European single currency meanwhile rose Tuesday to $1.2541 from $1.2435 late Monday, lifted by upbeat eurozone and German data on the eve of the U.S. Federal Reserve's latest monetary policy decision.

German investment sentiment rose sharply in December after a rebound the previous month, driven by a weak euro and plunging oil prices, a survey showed Tuesday.

The investor confidence index, calculated by the ZEW economic institute, jumped by 23.4 points in December, after rising for the first time this year in November, ZEW said in a statement.

In addition, a key survey showed that business activity in the eurozone accelerated slightly in December.

Markit Economics said its Composite Purchasing Managers Output Index for the 18-country zone that uses the single currency rose marginally to 51.7 points in December from 51.1 points in November.

so happy for Putin and the Ayatollah:)

be happy for the gulfies who are wasting billions and squandering their resources selling them cheap to support the US economy. slave nations

and btw this article is linking the whole thing to china only, while china does not even consume half as much oil as the US does (9mb v/s 19mb)

This is a a purely commercial decision which has some political benefits such as starving the crazy regimes like Khamanei and Putin's that are starving their populations in order to consolidate more power.
There is demand and supply and currently the market is over supplied, (remember the US produces as much as Saudi today) and in 2013 it only bought 25% of its crude from Gulf countries.
At above USD 100, Saudi was losing market share against producers and now they are flexing their commercial muscles bringing the shale oil industry in the US to their knees and kicking out other producers with high cost.
Driving down the price of crude is an excellent commercial decision for Saudi and it is also great for citizens and residents of Lebanon.
It should drive down the price of gazoline, diesel and electricity. Brilliant for consumers anywhere, bad for crazy dictators that rely on oil to bully their people and their neighbours.

hahahhaha guys please what trade are you guys in? i'd love to do some business with you if that's how smart you are :)

when trading in natural resources nobody cares what market share you have, it's how you maximize the total income you can generate from it.
saudi has a limited supply of oil, by selling it at 60$ they lose 40$ on each barrel, regardless of the market share. plain and simple.

compare to gold for instance, if you still havent gotten the concept. say you are sitting on a ton of gold, would you rather take 100% of the market by selling it at half its worth, or sell half the amount for the same money, and still be sitting on half a ton?
the funny part is that when saudi runs dry the US will dump it like a used diaper, and make billions on their own reserves, which they have been preserving and they will certainly not sell as cheap as they have been buying from other countries for the last decades.

_mowaten , you failed at humor, I don't think economy is an option for you?!

With oil at $40 soon, Colombia will stop selling to China, deep sea drilling will be un-economic, a lot of shale oil producers will go out of business. All these players will be out of the market and stop undercutting Saudi oil for quite some time, especially if the price remains low for the next couple of years.
They will need a lot of time to ramp up production once oil goes back to $100. Furthermore, all solar, wind and other alternative fuels will be uneconomic as long as oil is at $40.
Finally, why should Saudi cut production to benefit its competitors, especially shale.

I wonder if you actually read before you post, and if you read do you actually understand what you read. People are talking about stimulus in the U.S. and Chinese economies as a result of falling oil prices and not the Russian and Iranian economies....(

Both Russia and Iran are suffering the most. Russia needs oil to be @100 usd to meet its fiscal needs in 2014/2015 while Iran's oil exports are one of the very few sources of hard currency. The American and the Chinese economies in particular will benefit most by lower energy costs. As a consequence, lower costs to do business and manufacturing will lead to economic growth and lower inflation. Norma.Jean is spot on.

Who cares about China, the US, Iran or Saudi...all I care about is Lebanon and lower crude oil prices are great for people living in Lebanon.
Hezbollah should not worry about receiving their monthly allowance , the regime in the Islamic Republic of Iran is happy to starve its own population in order to fund its military presence in Lebanon and Syria.

I said that the Mullahs would be happy to starve their own population to fund their military presence in Lebanon and Syria. Meaning that if they had a choice between the welfare of their population and that of their power trip, they would choose the latter.
Furthermore, the GDP per capita of Iran is $4,763 and that of oil rich Lebanon is $9,928. Iraq's is $6,670. The Mullahs love to line their pockets and that of their progeny.
As for the "paid to post" comment, I say: bad loser. Really at the end of the day who cares if Iran, Russia or Saudi have a few billion less, what I care is to see this $9,928 per capita GDP go up and up and up and up.

you guys are thinking of how it affects Russia and Iran, or USA and China none of you seem nationalistic. none of you even considered how it will have an effect on Lebanon just thinking of world powers or regional ones. the reality is that oil was overpriced,since 2008 its p4ices went up dramatically, did you forget how it was only 30 $ a barrel? people are paying so much more on the gas pumps, making food ,electricity and other products more expensive. more importantly the lebanese government pays some subsidies on oil to lower the gas prices on the lebanese public and we both know our government is cash strapped!! and at the end of a day having the two largest economies(USA and China)in the world benefit will evetually actually befenit most world economies(expect heavily sanctioned countries that rely on selling oil) including lebanon because globalization in their economies.

that has nothing to do with being nationalistic. we're watching the saudis being stupid and laughing at their bad management of their resources.

Saudi has a $750 billion sovereign wealth fund, I would not worry about them. Worry about the shale oil cowboys, the crazy mullahs and the wannabe tzars.