ISF Clamps Down on Illegal Vendors in Tripoli 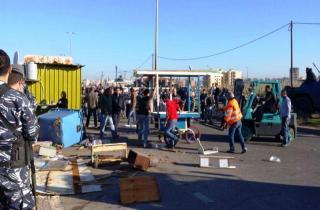 Vendors briefly blocked the road in the northern port city of Tripoli on Tuesday to protest a decision by the municipality to remove their carts.

The state-run National News Agency reported that the vendors had blocked al-Qobbeh and Majlaya road with burning tires to protest the decision.

Nohra had issued a decision in November to remove all violating vendors from public locations, ban buses and minivans from stopping in the city's main streets and routes, and preventing motorcycles from passing between 5:00 pm and 7 am.

In April, the ISF launched a crackdown on illegal vendors in the southern coastal city of Sidon.